You are at:Home»News»Caddieye rangefinder has sights set on disc golf

A new Indiegogo campaign is setting out to build a rangefinder that connects to your smartphone for use on the disc golf course. Also designed to be used on the ball golf course, the Caddieye rangefinder connects to your phone via Bluetooth and uses a laser system to determine the distance while using the phone’s camera as the main viewfinder. 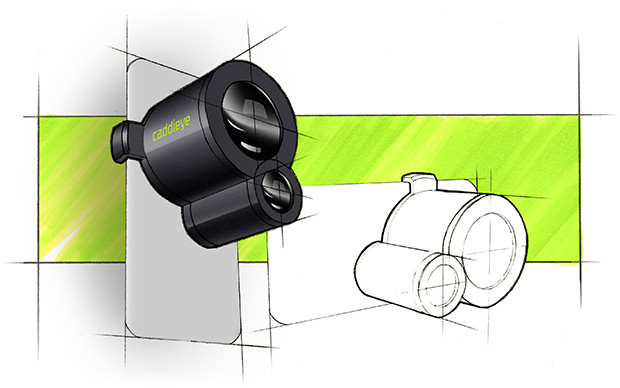 The Caddieye itself is powered by a separate battery charged by Mirco-USB and won’t need to pull from the phone’s battery beyond the Bluetooth connection. Once connected to your phone, you’d use the Caddieye app to help determine your distance.

The video above shows the Caddieye on the ball golf course, but a video example of it being used on the disc golf course is coming soon.

The team behind the Caddieye are based in Hämeenlinna, Finland. Timo Haapaniemi reached out to us in regards to the Indiegogo campaign and we quickly followed up with a few questions:

You note how there are two modes, one for ball golf and one for disc golf. What are the differences between the two?

“Both apps work nearly the same way. The disc golf app has 5,500 courses from all around the world. The handicap system and some game modes are different in golf so that’s why we must do own disc golf app. The rangefinder uses an autotarget system which is modified for both apps. In the disc golf app we set the autotarget at the basket.”

While range finders are common on the ball golf course, you really don’t see many on disc golf courses since the distances are so much shorter. Why do you think there is a need for this on the disc golf course?

“Normally, the holes are about 100 meters (328 feet) long. Most holes are not direct either and include bends so you can measure distance to certain points from the hole.

Disc golf is often described as a sport that doesn’t require a big investment. The early bird pricing is $100 and standard pricing $200 for your range finder which puts it in the higher end of the price spectrum with bags and baskets as your only other items in that range. If a disc golfer who has played for years without a range finder sees this and then sees the price tag, what would you say to convince them that the price is worth it?

“Disc golf’s number one thing is that it’s very easy to start and doesn’t need a very big investment. Still, disc golf doesn’t have things to help you look at your skills and development as a player. Our rangefinder is an easy way to manage your own game and improve results. In addition, we are making the best app on the market for disc golf. We bring all the information you need to know the course. As we continue development of the application we are also bringing in features, which can locate a disc golf disc and view your own statistics in the cloud.”

You describe how the range finder uses pulses of lasers aimed at the target. Ball golf courses are typically very wide open and aiming directly on the pin is easy. With many trees typically in the way of some holes, how reliable is it to focus on the basket instead of a tree?

“You control the Caddieye Rangefinder with your smartphone so you can be sure that is it to target at basket. The disc golf basket is also very big compared to a ball golf pin so targeting is very easy and fast. Every day we get more and more information at courses so we also use gps-location system. If you are the point where there are too many obstacles to use rangefinder you can use GPS.”

Early bird backers can get the Caddieye for $99-149 plus shipping, with other perks ranging from $199-$699 with the larger range providing multiple rangefinders.

The Indiegogo campaign is set to run until November 24 and the team hopes to raise $90,000. The campaign is set as a Flexible Funding campaign so it will receive any funds even if they don’t reach their $90,000 goal. Current plans are for the final product to be ready to ship by summer 2016.