You are at:Home»Instruction»Bringing some Ben Franklin wisdom to disc golf: When in doubt…don’t!

Golf had barely made its way to the United States during Benjamin Franklin’s lifetime, otherwise I’d be inclined to think that the above quote, taken from his Poor Richard’s Almanac, came to him while playing a round. I also believe that Franklin, if born into a world where both ball golf and disc golf existed, would undoubtedly have chosen the later. Add that to the long list of reasons why he is by far my favorite among the founding fathers.

I could write an entirely separate post listing and elaborating on the reasons he would favor disc golf – chief among them it’s accessibility to people of all classes and the endless intriguing flight path possibilities of a flying disc. But that is for another day. Let’s focus on that quote, and how it applies to disc golf.

I like to think the best interpretation of this nugget of wisdom in the golf world is this: In order to execute any shot successfully – and especially the most difficult ones – 100 percent conviction is a must. You can’t be waffling on which way to play it and expect things to turn out well. Let’s look at a couple examples:

You’re 30 feet away from the basket with a downhill putt where the terrain continues to slope down behind the basket with a lake at the bottom. You know this hole well, and as you approach your lie you think of the many times you’ve hit this putt and others like it.

A player attempts a comeback putt on hole 18 at Winthrop Gold in Rock Hill, SC after missing his downhill birdie run. (Photo by Jack Trageser)

Despite the treacherous backdrop, you’re thinking ‘go for it. I got this.’

You place your mini on the ground and begin to line up for the putt when thoughts of the possible results of a miss begin to creep into your mind.

“A soft, lofty putt will be less risky.”

“If I make this I’ll be leading two two strokes, and if I take a bogey here we’ll be tied.”

All of these thoughts would qualify as doubts, or at least distractions that arise from doubt, that if present in your mind as you’re about to attempt a shot should throw up a huge red flag that reads “DON’T!”

Your drive on a fairly wooded par 3 hole smacks an early tree and comes to rest in a spot that leaves you with two clear options. The first is to pitch out safely through a wide gap to your left, which will leave you with an easy upshot of 80 feet. The other option is a narrow gap in the trees directly between you and the basket 100 feet away that you believe you can get through cleanly. You want to save par, but you’re not quite decided yet and now it’s your turn to throw. You need to make a decision right away. The following thoughts float your brain in rapid succession: 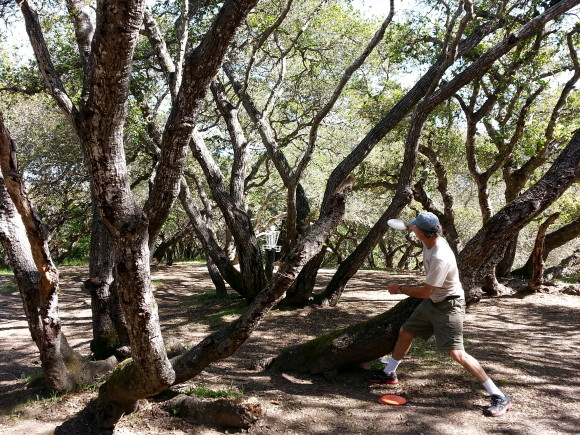 Choices abound on this shot. Hit an early branch and this player may be just as stymied on his next shot. Whatever he decides, there is no room for doubt. (Photo by Jack Trageser)

In this case your initial reaction was likely based on emotion more than analysis. You’re ticked off that you hit that tree and want to save par to ‘erase’ the mistake, so your first impulse is to look for how that might be accomplished (“I can hit that hole!”) As your logical brain has time to process, though, it begins to come up with reasons why the risky option isn’t the best choice, and these reasons represent doubt.

Example 1 and example 2 are both situations where it would be wise to take Benjamin Franklin’s pithy advice of ‘When in doubt . . . don’t’. There are differences between the two, but also one important similarity.

In example 1, the choice is clear-cut: either go for it and risk the roll-away, or play it safe and lay up. You initially intend to go for the birdie, which may or may not wise in and of itself. But good or bad judgement and game management are not the issue here. We’re talking about doubt, and once you’ve made your mind up any doubt that creeps in needs to be acknowledged and acted upon. Nine times out of 10 this means stepping back and switching to the safer play. (On that 1-out-of 10 exception, when it’s a shot you really need to make or should have no problems with, you still need to ‘own’ the existence of the doubts and do your best to clear your mind of them and recommit to your choice.)

In example 2, you haven’t ever really made your mind up. You’ve been debating the options from the time you saw your lie until right before you’re expected to throw. You’re trying to talk yourself into the risky play due to an emotional response, but the logical side of you demands to be heard as well. I suppose this is more uncertainty than doubt, but it amounts to the same thing: attempting a shot without full commitment and attention, when it requires both.

In both cases, as with every shot in golf, successful players follow a specific sequence for every shot: First evaluate the situation and options, next make a decision and commit fully to that decision, and finally, execute that decision with 100 percent conviction and focus. You can’t expect to be consistently successful unless you do all three, in that order. There will of course be times when doubt creeps in. One’s own thoughts are slippery and hard to harness. But when that happens . . . when in doubt . . . DON’T!

Remember, ‘discretion is the better part of valour.’ Wait, that’s Shakespeare’s quote, not Franklin’s, so forget I mentioned it.

If you want another Ben Franklin quote that can be applied to golf, consider ‘Honesty is the best policy’ or ‘He that is good for making excuses is seldom good for anything else’. I’m tellin’ ya, Ben Franklin would have loved disc golf.