If you’ve ever played at Maple Hill, you know that it’s not all that surprising that many of the touring pro disc golfers needed a weekend off after another grueling Maple Hill Open. That’s not the only reason we saw a quiet weekend, though. It’s that time of year again, when the best players in the world head overseas for the European stretch of the PDGA schedule. Right after the Maple Hill Open, many disc golfers hopped on planes and headed towards Sweden, where the Scandinavian Open will be held next week. Regardless, the disc golf season sleeps for no one, and we still have three A-tier tournaments to recap.

The European tournaments don’t always get the level of attention that the big events in the U.S do. However, the sport continues to grow at a rapid pace overseas (just look at Finland’s rise) and some big names are emerging. At Tour Lauste, familiar sponsored pros Pasi Koivu and Leo Piironen were in the field. While Koivu struggled, Piironen found himself in the hunt for most of the event. Still, though, the first round belonged to Henri Perala. With a 1038-rated 55, he leapt to the top of the leaderboard, leaving Hirsimäki 5 strokes out of the lead. With a host of players ahead of him, it would be difficult for Hirsimäki to recover from his 998-rated round.

Hirsimäki and Perala switched places in the second round. Where Perala faltered and shot a sub-1000 rated round, Hirsimäki asserted some dominance. His 1038-rated 56 was good enough to narrow the gap at the top of the leaderboard, landing him just a couple of strokes behind leaders Perala and Jyri Salminen. With just one round left, Hirsimäki had all of the momentum going his way.

Where some players might slip under the pressure, Hirsimäki blew the competition away. He stepped up his game and shot a 1048-rated 54. No one in the hunt for the win was able to come close to matching him, and Hirsimäki was left with a huge 7 stroke victory. He’ll be traveling to the Scandinavian Open next week, so we’ll see if he can keep the solid play going and make some noise in a much more competitive field.

Schweberger travels to Alaska and wins a close battle

We’re accustomed to seeing Brian Schweberger battle it out with the top competition in the Carolinas, but this weekend he took his talents out to Alaska. Is he trying to take down his record for most tournaments played in a season (61)? Who knows, but he’s already played in or registered for about 30. Regardless, he was down south winning an A-Tier over the weekend.

The top three disc golfers in this event – Schwebby, Chandler Fry, and James Beckner – played tight all through the four rounds and final 9. At no point was someone in command of the event. It seemed like whenever one of them had a hot round, like Schwebby’s 52 in the first round, the other two would slip up and shoot 978-rated 56s. Just when you thought the Schweberger would pull away, Fry would come back and shoot a 1029-rated round. It was a roller coaster match, but someone had to win.

When all was said and done, it really was the first round that separated Schweberger from the pack. By taking a 4 stroke lead, he was able to give himself enough of a cushion to withstand a few sub-1000 rated performances. It may not have been a flashy win, but in the end it was Brian Schweberger who sat at the top of the leaderboard by 3 strokes, with Chandler Fry in second and James Beckner in third. 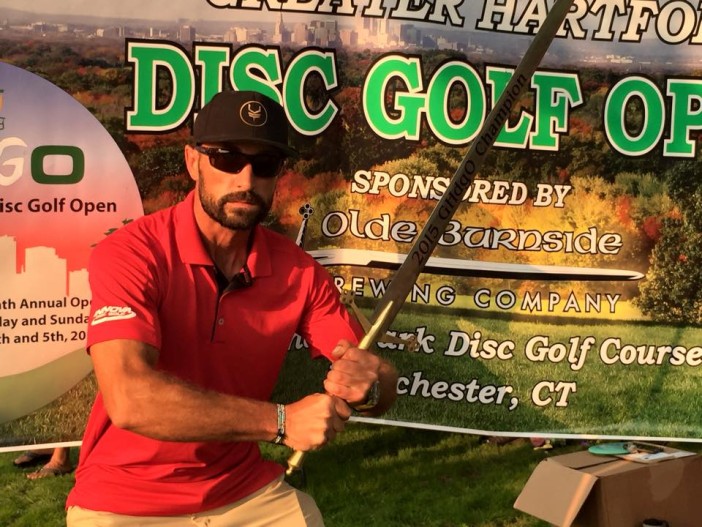 The Greater Hartford Disc Golf Open almost always runs right after the Maple Hill Open in an effort to lure some of the best players in the world down to Wickham Park in Connecticut. Back in 2013, it worked like a charm as Paul McBeth, Cam Colglazier, Will Schusterick, and a host of others headed to Connecticut. Despite the stiff competition, local pro Bobby Cowperthwait was able to take down the GHDGO. After a 7th place finish in 2014, Cowperthwait was back for more in 2015.

As many touring pros left right from the Maple Hill Open for Europe, the GHDGO wasn’t as packed with the top players in the world as it often is. Still, though, Cam Todd and A.J Risley were still on hand to provide some touring competition. Cowperthwait seemed unfazed.

Wick is a long and demanding course, and that’s evident in the fact that no one in the 28-man field was able to shoot three straight 1000-rated rounds. Matt Bell came flying out of the gates with the hot round of 60, and was one just 3 players to break a 1000 rating at the start of the event. However, he slipped up in the next two rounds and couldn’t quite keep up with Cam Todd and Cowperthwait.

In the second two rounds, Cowperthwait just barely edged Todd. Where Todd shot two 1000-rated rounds, both 66s, Cowperthwait was able to pick up two strokes in each round with 64s. In the end, Todd and Bell finished 4 strokes behind Cowperthwait. Bell was able to lean on his early lead and take a strong second place finish. Cowperthwait blew the competition away in the end, finishing far ahead of all but the next two golfers.

Like we said, the best of the best are overseas and they’re gearing up for what’s looking to be a huge event – the Scandinavian Open. Latitude 64 is excited about this one, and we’re looking forward to seeing how it all plays out. The disc golf season just continues to roll on, and this coming weekend’s major should prove to be as exciting as the past NTs and majors.