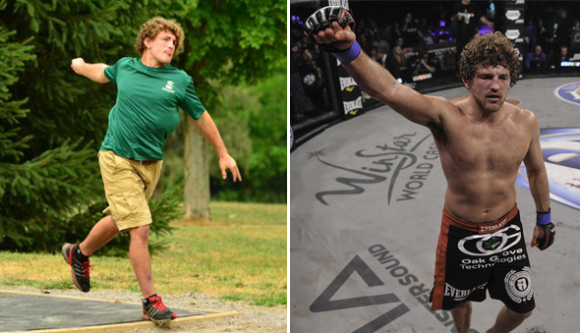 Ben Askren isn’t your typical disc golfer. You could also say that Askren isn’t your typical mixed martial arts champion. Askren has won two NCAA wrestling national championships, was a member of the 2008 United States Olympic team, finished second in the 2011 United States Amateur Disc Golf Championship, placed ninth in the 2011 Amateur Disc Golf World Championship, and now holds the Bellator welterweight World Championship belt. Along the way he has picked up a slot on Team Discraft and nearly hit a 1000 PDGA rating.

On January 24th, Askren defended his title against Karl Amoussou to improve his record to a perfect 11-0. After his victory we got in touch with Askren to talk about his road from wrestling to MMA champion with a little disc golf sprinkled in.

All Things Disc Golf: Before we get into talking about disc golf, we have to congratulate you on retaining the Bellator welterweight belt in your recent victory. For those unfamiliar with Bellator, what is Bellator all about? How did you get started with it?

Ben Askren: Bellator is an MMA promotion similar to the UFC. I started fighting when I finished wrestling in 2008.

All Things Disc Golf: Now that you have defended your title, what does Bellator have in store for you next?

Ben Askren: I have another opponent already lined up and waiting. I am just waiting on Bellator to give me a date.

All Things Disc Golf: When looking at your bio, anyone can clearly see a very diverse portfolio. From a collegiate wrestling where you won two NCAA championships, a 2008 Olympian, mix martial arts champion, and professional disc golfer. You certainly cover quite a bit. Did you ever expect to accomplish all of that by the age of 28?

Ben Askren: I had no timeline ever set. I have been wrestling since I was a kid. I always enjoyed working hard and being successful. MMA and disc golf were two things that came along later in my life that I have been able to succeed at.

Ben Askren: I played a few times in high school, but not much. I really started playing in my second year of college. I don’t know what it is about it, but I was hooked.

All Things Disc Golf: You are a part of Team Discraft and carry at PDGA rating of 978. Your peak rating was 996 in August 2011. How often are you able to play disc golf today? When training for a Bellator fight, do you get much time to play disc golf at all?

Ben Askren: Unfortunately not as much as I would like. Between MMA and teaching wrestling I don’t have a lot of extra time. I only got to play in one tourney in 2012, but I am going to shoot to play in a bunch more this year.

Ben Askren: I will play in more tournies this year. The positive thing about disc golf is I will be able to play forever!!! So there is no hurry on it. I can take my time and just get better as I go.

All Things Disc Golf: You are obviously a competitor at heart. What is a bigger rush… final round of a MMA fight or the pressure of the final few disc golf holes in the final round?

Ben Askren: They are totally different, but it was a rush at the USADGC in 2011 when I made up like 5 strokes in the last round and almost caught the leader.

All Things Disc Golf: Have you turned any other fighters onto disc golf?

Ben Askren: Oh yeah, I have gotten a bunch of big name fighters to try Disc. The only person I have gotten hooked is my Roufusport teammate Rick Glenn (12-2). He loves to play now.

All Things Disc Golf: Assuming you still get a chance to play disc golf every now and then, what are some of your favorite discs to throw?

Ben Askren: I play disc a lot casually just not much competitively. The BUZZZ has been my favorite disc for years now, I love it.

Ben Askren: Probably one of the disc tours I have been on. I have been on six tours where my friends and I pick 20-30 courses to play and then go play them in a week. There isn’t anything more fun than discing from sun up to sun down.

All Things Disc Golf: What are your disc golf plans for 2013? Hitting up any major, or local, tournaments?

Ben Askren: No plans yet, I have to see where my fighting falls into place and go from there.

All Things Disc Golf: Who makes it possible for you to be both a professional MMA fighter and disc golfer?

Ben Askren: Discraft has been a great sponsor for 2 years now.