You are at:Home»Reviews»Putters»Axiom Discs Proxy Review

When it comes to putters, the vast majority of them offer two features: little-to-no turn and a decent fade. The minority group of putters include those with a little turn and no fade. There are a few out there, but the numbers are small. Now you can add the Axiom Discs Proxy to that group that shows some turn before settling down with virtually no fade.

The Axiom Discs Proxy is the second putter to come from the MVP Disc Sports spin-off and shares the same core as the Axiom Discs Envy. Axiom sent us a new Proxy to test out and review on the course. Axiom has this to say about their second putter:

The Proxy shares the Envy mold’s core, lending the same low-profile feel and solid grip, along with a short wing width and wide flight plate diameter for superior glide. The Proxy sets itself apart from the Envy with a remarkably straight forward-fading finish. A bit of high-speed turn potential allows the Proxy’s lines to be manipulated over a broad range of power, and helps less powerful throwers achieve straight putter drives.

With the Envy we talked about how it had a very small feel to it and that those same thoughts transfer over to the Proxy. It’s another one of those discs that give bigger hands great control and smaller hands will feel right at home with. For many in our testing group this was a welcome sight on both drives and approach shots. When we needed a shot with a little bit of added “touch” to it, the Proxy delivered for us.

Starting off the tee, the Proxy is one of the straightest putters we’ve thrown. We noted how the Envy showed a little bit of turn and would flip up ever so slightly when thrown with a little bit of hyzer. For the Proxy, there is little doubt the turn is there and not much at the end to bring it back.

On a flat release you’ll see the Proxy carry a very slow and methodical turn. It isn’t going to turn that hard or fast, but it will carry on down the fairway on a slight left to right line. Now, if you give it a little hyzer it will easily flip up to flat and depending on your release angle it might even show a continued turn midway through the flight.

While the Envy had some fade, the Proxy certainly doesn’t. As it carries down with that slight turn, don’t expect it to finish to the left much at at all. When it was holding that turn, it would flatten back out and just settle to the ground. The end result is a flight with a lot of control and predictability. Even on shots where we threw it with a little hyzer flip, the Proxy would still continue to fly forward at the end of flight. This is a good example of the “forward fade” we talk about at times. It won’t move from right to left, but it will carry just a little further before landing.

With the understable flight, it can really shine on approach shots. If you take a little power off of it the turn will help it fly nice and straight before showing the same minimal fade that you’d see off the tee. It won’t really be useful on those shots where you need it to fade around a tree, but for anything right at the basket, or even slight turnover shots, the Proxy will be a dream to throw.

Speaking of turnover shots, if you’re reading this review and thinking that it would be a nice disc to throw on those right to left lines, you’re correct. You get a lot of control and it will easily hold those lines for you.

Inside the circle the Proxy might appeal to the spin putter more than the push or pitch putter. The slight turn and lack of any fade will give you a very straight putt. Some putters like to account for a little fade at the end to crash into the chains. You won’t get that with the Proxy. Just go right for the center of the chains and let the disc do the work. Even outside the circle on some longer putts the Proxy will like the slightly understable flight and might help carry a little further for you. 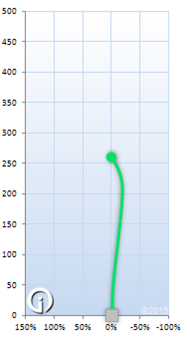 Overall, we’d rate the Axiom Discs Proxy at 3, 3.5, -1, 0. It’s a unique flight with a little turn followed by no fade. This makes for some very straight drives and approach shots and a deadly accurate putter inside the circle.

The flight chart from inbounds Disc Golf shows a flight similar to what we were experiencing. The turn is going to be there all the time and it will finish nearly directly in front of the line it is riding.

The Axiom Discs Proxy is another nice addition to the Axiom Discs lineup. The Envy was quite popular and we expect to see the Proxy follow in its footsteps. It is a nice understable option along side the Envy. It doesn’t take long to figure out the control it brings to the table. You’ll quickly be able to learn just how straight it can fly and with a little bit of touch, the Proxy can hit those small windows and finish right next to the basket.