You are at:Home»Reviews»Drivers»Axiom Discs Inspire Review

The first driver from Axiom Discs, the Crave, proved to be quite popular due to its very neutral flight with a touch of extra glide. Now, the Axiom Discs Inspire takes many of the same great qualities of the Crave and adds in just a bit more turn that results in a very nice flight.

Axiom Discs has a lot to say about their second driver:

The Inspire is the second fairway driver from Axiom Discs, and is an understable complement to the breakout hit Crave. Skilled players will be able to get smooth straight and turnover/flip lines from the Inspire, while beginners and lower-powered throwers will gain distance and usability from its understable nature. Inspire is the easiest-to-throw GYRO driver.

Axiom Discs sent us an Inspire to review and after some time on the course with it, we can tell this could easily carve its way into many disc golf bags. Our Inspire weighed in at 167g. Because we expected a slightly understable flight to begin with, we were cautious to put too much power into the Inspire due to the lighter weight. Well, after our first few throws we realized that even in the lighter weights, the Inspire was able to hold up to some strong throws. Even in light weights, this thing is no joke.

For the distances we were getting and the style of flight we were getting, we were a little surprised by how small the Inspire felt in the hand. This rim is nothing to be afraid of and can be a great driver for beginners along with a great control driver for more advanced players.

Whenever we pick up a new disc to review, our first throws are always thrown at full power to see exactly what it can do. With our first toss the Inspire launched out of our hand quickly and kicked into turn right away. We first thought we put too much power on it as it continued to head down the fairway and hold that turn. Instead of continuing to roll head into a deeper turn, the Inspire would quickly turn and then remain on that angle for most of the flight. While understable, we’d almost call the Inspire a “stable understable” disc. Think of it like a governor on a small engine. It will certainly turn, but it reaches a point and then stops and holds that angle.

Now, as surprising as the turn was, the Inspire also has a decent amount of fade which helps it break out of the turn and finish back to the left. Even when the Inspire was in a pretty good turn, it would fade back to the left. While some of the other understable options from Axiom Discs (and their MVP cousin) tend to have little fade, the Inspire breaks that mold and does have a nice finish to it.

With everything we’ve said so far, yes, this is a great hyzer flip disc. Drop that wing down, let one rip and watch it flip up, float to the right a touch before a decent fade to the left. Power throwers were really enjoying the controllable flight of the Inspire. By altering the release angle, you can really get the Inspire to fly on many different lines. 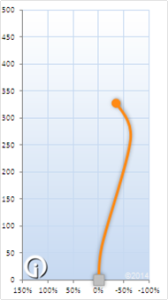 Overall, we’d rate the Axiom Discs Inspire at 8, 4.5, -2.5 to -3, 2. Stronger arms will likely see a little more turn, but it is still a pretty stable turn. The Inspire brings a huge amount of control to it and can fly some very unique lines in the air.

The flight chart from inbounds Disc Golf shows this flight we were seeing. The turn kicks in early, but holds the line. Then, at the end of the flight, it will fade back out. If you need a stronger flight, give it some hyzer and let it fly.

The flight of the Inspire is similar to a slightly beat in Innova Valkyrie, but with a much flatter profile. For those looking for a very controllable driver that can reach some surprising distances, the Axiom Discs Inspire could be what you’re looking for. It will show some turn before a moderate fade which can equal some nice flights down the fairway.