You are at:Home»Reviews»Drivers»Axiom Discs Insanity Review

Axiom Discs has this to say about their long distance flier:

The Insanity is the first of our 20mm Distance Driver class for Axiom Discs, complementing the MVP 20mm class. The Insanity is best described as a worn-in MVP Inertia, with slightly more high speed turn and a diminished fade. For average power throwers the Insanity will be remarkably straight, while high power throwers can execute precise flip and turnover lines with ease. Whether you’re looking for that sweet-spot worn disc flight, or you’re looking to achieve bigger Inertia lines with less power, give Insanity a shot.

Axiom Discs sent us an Insanity to check out on the course and the results were quite impressive. Axiom Discs talks about how it is a slightly worn-in Inertia. It didn’t take many throws for the Insanity to remind us of the similarities.

In our testing group the average to slightly above average arms saw the most from the Insanity. If you really power into the Insanity you’ll see a decent sized turn, but for disc golfers who can reach the 300-350 foot level consistently will see a very straight flight. We were able to see a small turn from the Insanity to help carry some distance, but it wasn’t overly flippy. It’s the type of turn you’d want to see and expect to see from a slightly understable distance driver. This turn helps with the overall flight and gives the Insanity some room to fly.

Stronger arms needed to give the Insanity a little added hyzer to ensure the straighter flight, but it was still very controllable. The Insanity would show a very consistent turn after flipping up from hyzer to a flat angle. You could really stick it on a straight path and let the disc do the work.

Now, it is possible to over power the Insanity. If you have a very strong arm and don’t give it quite enough hyzer out of your hand, the Insanity very easily could and likely will roll a little too much for you. If you can balance the power you put into the Insanity the results will be pleasing.

If you give it some added height to fly and really give it some power the Insanity is able to pull off some nice anhyzers. It will hold that angle before finishing on nearly the same angle at the end of the flight.

After the Insanity carries down the fairway and rides that turn we’ve been talking about, you’ll notice a very soft fade. On any throw with the Insanity when you aren’t riding a big anhyzer, the fade is minimal. It will finish to the left, but it won’t try and skip away from you or even cut in that hard. The end result is a very straight flight. If you have a hole that requires some distance and the disc has some room to fly, you can likely go right at the basket with the Insanity. The turn will help it move off center of the fairway and the fade will bring it back as close to center as possible. Anything with a little hyzer on release could finish a little further left, but nothing too dramatic.

The Insanity is also a very easy disc to throw for distance. We were able to get some impressive results with it due to the very easy to hold rim and understable flight. The very low profile helps the Insanity really get down the fairway quickly. From the release out of your hand to the final moments of the flight, the Insanity has a very smooth flight. You don’t have a very big dome and a very big rim to deal with. It will feel like a fairway driver, but it certainly doesn’t fly like one. 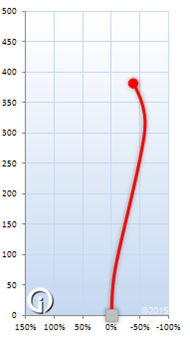 Overall, we’d rate the Axiom Discs Insanity at 10, 4.5, -3.25, 1. It is just a hair less stable than the MVP Inertia. Many with an average arm will see a slight turn and small fade while stronger power arms can really produce some big turns with the Insanity.

The flight chart from inbounds Disc Golf shows a flight close to what power arms will see. The turn is certainly there and the fade will be minimal at best.

There is very little to dislike about the Insanity. It is a disc that you throw for two reasons: distance and accuracy. It has a rim size that nearly everyone can get used to and a flight that can appeal to a wide audience. Average arms were seeing some wonderfully straight flights. Stronger arms are getting a disc with a lot of tools with it. From hyzer flips to big turnovers the Axiom Discs Insanity will be a disc you reach for often.