You are at:Home»Reviews»Drivers»Axiom Discs Fireball Review

Axiom Discs continues to establish their first line of distance drivers with the release of the overstable Axiom Discs Fireball. The Fireball offers a lot of high speed stability that can really handle power before a late and moderately strong fade. It’s a unique combination that provides more control than you’d expect out of an overstable driver.

Axiom Discs says this about their overstable offering:

The Fireball is overstable and wind-resistant like the MVP Motion, but has an overall straighter and longer flight profile. The Fireball has a longer forward push during its early stage of fade, where the Motion would have begun a long gradual fade. At the end of its flight the Fireball will drop later and more abruptly than the Motion.

Axiom Discs sent us a Fireball in Neutron plastic to review and they were right when they say it easily compares to the MVP Motion.

The Fireball has the same flat top that many of the overstable discs from Axiom or MVP tend to have. A very small shoulder leads into a board flat top. There isn’t a hint of dome to be found which gives it a very sleek profile when you hold it.

The rim size of the Fireball measures at 20 mm and is very manageable for virtually everyone. Even smaller hands should find the Fireball easy to hold. The depth of the rim is nice too. It isn’t isn’t that deep, but it also isn’t the shallowest either. It’s a nice midpoint.

As for the flight, the Fireball is another one of those discs that can not only handle the power, it flies better the more you give it. The high speed stability is certainly there, but you can really work with it. We noted in our review of the Motion how we could almost give it a 0.25 rating for turn. The Fireball certainly has a lot of resistance but we’d settle on just a solid 0 turn rating. Even if you get a little bit of turn, it isn’t going anywhere. We put a little anhyzer on some shots and it quickly flexed right back out to flat. Give the Fireball as much as you can.

There isn’t a lot of glide with the Fireball and it really relies more on speed and your power to gain distance. This helps with the accuracy of the disc due to the expected results of each throw. If you can get a feel for what the Fireball wants to do at different power levels, you have a very useful tool on your hands. We were able to power down a few of our shots, give it a little anhyzer and let the disc do the work. We knew it would flex back before a fade and due to the lower power it would be a little easier to place. We’ve thrown some overstable drivers that want to glide out a little more and you can lose some of that control. That isn’t the case with the Fireball. The glide just isn’t there to give you anything unexpected.

At the end of the flight, the Fireball has a unique fade. It will head left. No doubt about that. It does it on a line a little less sharp than the Motion. The Motion had a forward fade for us, but it was still strong. The Fireball on the other hand will also push forward, but on a straighter line before really kicking left late. You’ll see it hold a steady fade for 80% of its finish before really ramping up it’s fade at the very end. By that time though the Fireball is likely close to the ground which helps with the accuracy of the finish. We had a few shots where we kept the entire flight on a lower line and it would hit the ground with quite a bit of power still in its flight which would result in a decent skip finish.

Overall, we’d rate the Axiom Discs Fireball at 10, 4, 0, 3.25. Those are close to numbers we gave to the MVP Motion, but the flights are a little different. The Fireball’s fade will hang a little straighter before finishing at almost the same point to the left with a little added energy, while the Motion gets there on a more gradual curve. The Fireball will also remain very stable, but isn’t going to overwhelm you when you first give it a toss. 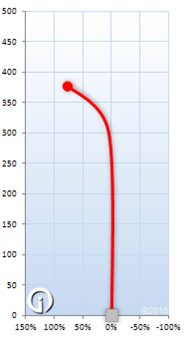 The flight chart from inbounds Disc Golf shows a flight close to what we saw. Plenty of stability at high speeds before a fade at the end that will reliably finish left. We might have seen a little more hook just at the end of the flight.

When we first saw the name of the Firebird we of course thought of the similarly named Innova Firebird. Are they similar? Sure, but they aren’t the same disc. The Fireball is a little straighter and doesn’t have as strong of a fade as the Firebird. You’re almost going to get a fairway driver like flight out of the Fireball. It will handle power, but the straight-yet-strong finish gives you some added accuracy. You can adjust just how strong that finish is by the release angle. Give it more hyzer and it will be a little stronger. Give it a little less and it will flex out to an even straighter finish.

The Axiom Discs Fireball is certainly one that gives you the confidence of not turning over and the accuracy you desire at the same time.