You are at:Home»Reviews»Putters»Axiom Discs Envy Review

In early January, our friends at MVP Disc Sports put out a very unexpected announcement. With a new partnership in place, a new company was born with the help of MVP. Axiom Discs came onto the market with a similar look to MVP’s disc, but with one striking difference: color.

Axiom Discs feature MVP’s overmold and gyro technology, but with vibrant color combinations. While MVP’s rims will remain black with colorful flight plates, you can dream up just about every combination in the rainbow when it comes to the products from Axiom Discs.

One of their first releases is the Axiom Discs Envy. The Envy is similar to MVP’s Ion, yet it does have its share of differences. Axiom Discs says this about the Envy:

The Envy has a smooth modern feel that fits in the hand perfectly, lending confidence for both putt and approach duties. The Envy exhibits reliable high-speed stability and a minimal fade. With a slightly lower profile and cruising speed than the Ion and Anode class, the Envy is a uniquely “lid-like” stable putter.

Axiom Discs sent us an Envy to review and after fighting through one nasty winter, we finally have enough data to give an honest review. The Envy does feel quite shallow in the hand which translated to slightly more control during our tests. We always felt that the feel of the Envy was quite comfortable.

With our first throws we noticed a very similar flight to the Ion, but they aren’t 100% identical. The Envy doesn’t have quite the amount of glide that the Ion does, but it has enough to help it down the fairway. The slightly smaller rim translated to a little slower speed. In our tests though, the shallower feel to the Envy actually made it appear a little easier to throw off the tee.

For us, the Envy seemed more stable at high speeds than we expected. We actually felt as if the Envy could take a little more power than the Ion and other putters in this stable category. On some throws where we released it with just a touch of hyzer, it would flip up quickly and remain very stable and straight. Even on a flat release, there was barely any turn to it at all. The Envy really  is a disc that you can pick out a line straight ahead and hit it. You don’t need to worry about it turning over enough to start a big turn. 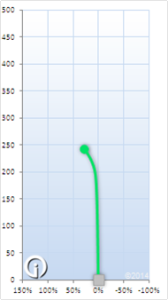 Now, with how stable it was at high speeds, we were initially expecting a moderate amount of fade. The Envy does have a touch of fade, but it is minimal and it isn’t very strong. Expect it to finish left of your initial flight path, but not by much. The fade is actually quite forward if compared to other similar putters. A few times during our tests we did make note of how much we liked the finish of the Envy.

Overall, we’d rate the Axiom Discs Envy at 3, 3.5, -0.5, 1.25. It doesn’t have a a lot of speed and the amount of glide isn’t tremendous, but with a nice shallow feel, it is easy to get the Envy up to speed and toss it down the fairway. While it has just a touch of turn, it is a very stable disc.

The flight chart from inbounds Disc Golf shows a very similar flight to what we experienced. It isn’t a very long putter, but it is stable and controllable.

For the first time, a disc from MVP Disc Sports or Axiom Discs has been released in Neutron Soft plastic. Previously, the only soft plastic discs were in the Proton blend from MVP. Axiom Discs sent us a new Soft Envy to check out and we believe it might be a hair more stable than the previously released Envy in normal Neutron plastic.

First off, the Soft Neutron plastic is quite flexible. While it still has the same nice grip the normal Neutron has, there is a lot of flex in the Soft version. It doesn’t take a lot of effort to completely fold the Soft Envy in half and “taco” the disc. Without a doubt, this is some of the most flexible plastic available today. We noticed it quite a bit on tree hits when the Soft Envy would hit, absorb energy and not kick very hard. When it hit the ground the flex in the plastic would certainly allow it to lose a lot of energy. There certainly isn’t a lot of skipping going on with the Soft Envy.

As for the flight, the Soft Envy didn’t show that small turn that we saw in the Neutron version. This was much more stable at high speeds and never showed any hint of turn. We were able to really lean into it quite a bit and trust it would remain on that same line.

If you’ve been wanting a shallow, stable putter in soft plastic, the new Soft Envy fills that desire.