You are at:Home»Reviews»Drivers»Axiom Discs Crave Review 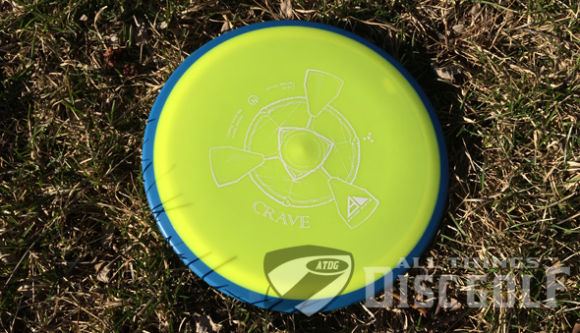 After releasing their putter and midrange, Axiom Discs has sped it up and stepped into fairway drivers with the release of the Axiom Discs Crave. The Crave looks to be that fairway driver you can reach for often and trust the flight you’ll get from it each and every time.

Axiom Discs says you should expect very controllable flights from the Crave:

Relative to MVP drivers, the Crave is like a seasoned Servo. The popular “worn workhorse-stable” vibe is achieved with subtle wing contours that also feel great in the hand. The stability, range of weights, and easy throw make the Crave a GYRO rig staple.

A Crave was sent our way for this review and there is little doubt the Crave is the controllable style fairway driver they described. After reviewing the fairway drivers from Axiom’s sister company, MVP Disc Sports, we just might be inclined to call this the best fairway from the pair of companies. There is nothing to dislike about the feel of the Crave. The rim is wide enough to give you something to hold onto, but small enough to not feel like you’re holding a very large driver. With a clean release an the feel can translate to a lot of control as well.

The two discs from MVP you could compare the Crave to are the Servo and Volt. The Crave falls right in between the two. Similar flight to both, but a touch faster than the Servo and a touch slower than the Volt. We said in our review of the Servo that it lacked a little glide. Well, the Crave makes up for that. The Crave’s combination of speed and glide really does make a great match.

When you get the Crave up to speed, you’ll see it kick into a little turn, but it is what we commonly refer to as a stable turn. It will track to the right and hold a slight anhyzer angle, but it won’t flip and roll on you. If you release flat, it will flip up and drive straight. On turn over shot, you’d need to give it a little added height and help it turn over to maintain that flight. Regardless of the angle out of your hand, it will perform nicely.

The Crave does have a moderate amount of fade, but it isn’t mind blowing. Combined with the turn, it does help turn your shots into very straight lines. On a hyzer flip, it will finish left, but on a flat release, it will return to just past center on a drive. Again, this disc is controllable and straight.

We also should note the blend of Neutron plastic that was used on this run on Craves. Ours was a little translucent and not the typical opaque we’ve come to known. It also might be a touch softer than in the past. Multiple members on our review team commented about it.

Overall, we’d rate the Crave at 7.5, 4.5, -1 to -1.5, 1.5 to 2. The speed-glide combo helps create a great little fairway driver. The Crave does have a nice little amount of turn followed by just a touch of fade. Power arms to weaker arms should find a positive experience with Axiom Discs’ first fairway driver.

If you have the Crave in the bag, we’d expect it to be in your hand and on the fairway more than sitting in the bag. It will be a workhorse for you. While we called the Servo the most beginner friendly fairway driver, we might be so inclined to call the Crave the best fairway driver from the Axiom Discs-MVP Disc Sports family.