You are at:Home»Reviews»Drivers»Axiom Discs Clash Review

When you get the chance to throw nearly every new disc available, you can start to figure out what the flight could potentially be like by just looking at it and holding it. In the case of the Axiom Discs Clash, we’ll admit, we were wrong and in a good way. The Axiom Discs Clash is a very controllable fairway driver that should appeal to nearly any skill level out there.

Axiom Discs says this about the Clash:

The Clash is a unique line-shaping complement to the Crave, built to open up more lines on the fairway. Wherever the Crave is too straight, or doesn’t fade enough, the Clash picks up and shines. High-power throws will activate a greater turning phase than Crave to shape lines; however at any power level the Clash will fade more than the Crave. This yields a responsive and rangeable fairway driver.

Axiom Discs sent us a Clash in their Neutron plastic that weighs in at 168g. Our initial thoughts just by looking at it led us to believe the Clash would be quite stable and would show very little turn and a strong fade. We were pleasantly surprised when the Clash showed some action on the fairway and produced a very nice flight that nearly any disc golfer can enjoy.

It was clear the Clash was a controllable disc. If we gave it a little hyzer on release, it would flip up nicely and glide down the fairway. If we gave it a flat release, it would start to show some turn, but never turn into a roller. From the strongest arms to the weakest arms, there was always something there from the Clash. It would respond to the type of shot you wanted. It never backed down from some power and could hold up nicely when slowed down.

One of our best shots with the Clash came on a relatively open hole that required you to hit a shorter ceiling and tighter window further down the fairway. You don’t need a very flashy shot to make this happen, but you do need control. If you throw something too stable, odds are it will fade out too early. If your disc is too flippy, it won’t break through the gap on time and you’ll be left far right of the basket. The Clash hit the window with ease. We started it right down the heart of the fairway and let the Clash do the work. After a little bit of turn, it held a nice straight line as the disc was on a very slight anhyzer angle. As it continued to carry down the fairway with some decent glide, it started to break out of the turn and begin to fade. Once the disc settled down, we were slightly beyond the basket, but in a great position for our two.

Thanks to the great control that shot seemed easier than ever. Even for a lighter disc (168g), we liked the amount of turn in the Clash. Often times when we throw lighter plastic we start to over power it and lose some of the touch. That wasn’t the case with the Clash. If we wanted a little more fade all we needed to do was give it some added hyzer and it wouldn’t turn over quite as much. It didn’t take us long to learn just how to use the Clash in terms of control.

We had little to dislike about the Clash’s stability at high speeds. We also had very little to dislike about the fade at the end of the flight. Often times when a disc is flying with a little bit of turn, you don’t expect it to finish left that hard. The disc was designed to be neutral and finish very straight. In terms of the Clash, it doesn’t have the strongest fade in the world, but it will return out of any turn and finish to the left. If we released it with some hyzer and allowed it to flip up flat, it was only a matter of time until the fade sent the Clash to the left of the initial line we started on — a feature many desire in a fairway driver.

If we didn’t want as strong of a fade, we allowed it to turn a little more before having the Clash finish just beyond the initial center line. Just like the stability at high speeds, the low speed stability of the Clash translates to even more control. It is all in the combination of release angle and power.

We’d suspect that the heavier weights would bring in a touch more fade than the lighter one we were testing. Regardless, you’ll be able to pick up on the flight pattern relatively quickly and learn just how useful the Clash can be. 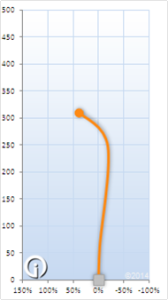 Overall, we’d rate the Axiom Discs Clash at 7, 4.5, -1.5, 2. It’s another great addition to the Axiom Discs/MVP Disc Sports fairway line up. With just enough turn followed by a nice fade, the lines you can hit with the Clash are nearly limitless.

The flight chart from inbounds Disc Golf shows this s-curve style flight we were experiencing. In our tests, we had a little more turn and not quite as much fade, which could be chalked up to the weight. It certainly isn’t the longest fairway driver, but it is one of the most controllable.

It isn’t very often when a neutral flying disc like the Axiom Discs Clash can be so useful for nearly every member of our testing team. Some discs appeal to the power throwers while some appeal to the slower arms. The control of the Axiom Discs Clash was something that was loved across the board. Once we dialed in the correct power to release angle ratios it was clear just how useful the Clash can be. Perfectly straight shots, slight turnovers, straight to overstable finishes, etc…. If you haven’t looked at the fairway drivers from Axiom Discs, the Clash is a great place to start.