You are at:Home»Reviews»Midranges»Axiom Discs Alias Review 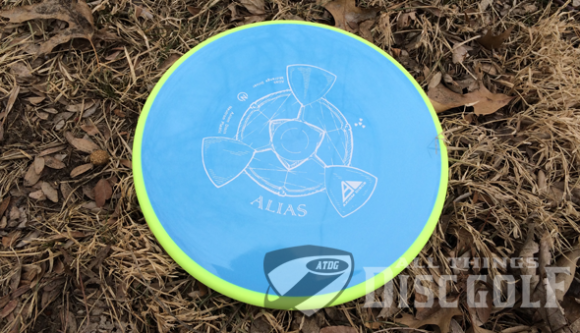 Along with the release of the Envy, Axiom Discs coupled their initial release with the Axiom Discs Alias. The Alias is a smaller diameter midrange with a very straight flight. If you’re a fan of MVP, it is easy to wonder how the Alias lines up along side MVP’s Tangent and Axis. They all share some characteristics, but the Alias can stand alone.

Axiom Discs says this about their first midrange:

The Alias is a straight-flying placement midrange similar to the popular Tangent, but with a bit more high-speed stability. This point-and-shoot midrange has the ability to lock into straight lines and hyzers, as well as pan out of high anhyzer shots and shallow helix lines. The Alias simply goes where it is sent.

Axiom Discs sent us an Alias to test out and we could easily see the similarities to the Axis and Tangent. If the Axis, Tangent and Alias were brothers, the Axis would be the first born, the Tangent would fall in last and the Alias is clearly the middle child. While it can be tough to be the middle child at times, the Alias has a clear spot in this family.

All three discs share the same core, but the rim is different for the trio. The Alias isn’t quite as fast as the Axis, but is faster than the Tangent. In our tests with the Tangent we noted a very controllable flight that was slightly shorter than other midranges.

Right away we saw a very familiar flight with the Alias, but it was slightly longer. If you’re a Tangent thrower, take that flight that you experience and make it just a little longer. If you were frustrated with the distance you were getting with the Tangent and wanted a little more, the Alias could be the ticket.

The Alias has enough speed  to be a typical workhorse type midrange, but isn’t too quick at the same time. It is a disc that you can reach for often and get predictable results. It will come out of your hand quickly and easily reach a cruising speed before flying on a very straight flight path.

Axiom Discs notes that the Alias is a little more stable than the Tangent and we would agree with that. It isn’t overstable by any means, but it does not have as much turn. Expect a little turn out of the Alias which really allows you to treat it as a point and shoot type disc. If you need shot straight ahead, short little hyzer shot, or a small sweeping anhyzer, the Alias can do it for you. Just enough turn followed by just enough fade. 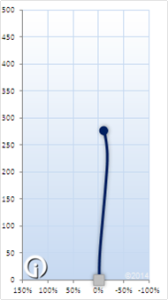 The fade of the Alias is slim, but enough to break it it out of a turn and make it return back to center. You won’t have to worry about the Alias fading too far away. It is a very straight disc from start to finish.

Overall, we’d rate the Axiom Discs Alias at 4.75, 4.25, -1, 1. It is slightly faster than the Tangent, but not quite the same speed as the Axis. It has a slightly above average amount of glide and enough turn and fade to give you great control and produce a very straight flight.

The flight chart from inbounds Disc Golf shows this understable to neutral flight we have talked about. If you need to give it a little hyzer on release, it will flip up nicely and fly on a very straight line.

The Axiom Discs Alias is a midrange disc that you can lean on for most holes. With a very straight flight, the Alias will remind people of both an MVP Axis and Tangent. The Alias slots in nicely right between the two. If you’ve been wanting a slightly longer Tangent with a very similar flight, the Alias is the ticket.