You are at:Home»News»Announcing the Disc Golf World Tour

From the creation of the Frisbee and the evolution of the beveled-edge disc by Dave Dunipace to the founding of the Professional Disc Golf Association and establishment of the National Tour, we’ve seen disc golf continue to grow around the world. Today marks another chapter in the evolution of disc golf.

At the opening ceremonies for the 2015 United States Disc Golf Championships, Jussi Meresmaa announced the creation of the Disc Golf World Tour. The Disc Golf World Tour will begin operations independent of the PDGA with the focus not just on the disc golf community, but with an eye on the people and companies who are not involved with disc golf.

A number of events are planned around the world for the start of the Disc Golf World Tour in 2016. We first talked with Meresmaa a few weeks ago to hear the details on the DGWT and what he and his business partners have planned over the next few years as the DGWT graduates from idea to reality. We talked with Meresmaa about what disc golfers and those around us can expect as the DGWT begins play.

Today is arguably one of the largest announcements disc golf has seen for quite some time. When did you first have the idea of the Disc Golf World Tour and why do you see the need for it?

“The idea of the Disc Golf World Tour dates all the way back to 2004 when I was running the Nordic Disc Golf Tour, including events from Finland, Sweden, Norway and Denmark. Back then it was just a dream to have a real global Disc Golf Tour. The sport was too small for that at the time. Since then a lot of things have changed. After our first national live broadcast in 2013 from the European Open, I got a message from former disc golfer Mikael Hästbacka (working in media business at that moment) that we should talk. Since then we have been tinkering with the concept and the last 12 months has been really intense. This is a bold idea and surely will raise some eyebrows. I’m confident that this thing will fly.”

Give us the elevator speech for the Disc Golf World Tour. This is more than just the biggest tournaments with the top competitors, right?

“We have been working with the PDGA for some months now. When there is a new concept that is more spearheaded than the current standard it makes time. Currently we are cruising alone, but I’m sure we will find a way to work together. The PDGA wants this sport to grow, but their structure is more complicated and needs time to adjust to new things.”

Very few disc golfers today can say they disc golf for a living. Taking prize money is one thing, but having disc golf as a career is rare. In the model of the Disc Golf World Tour, you’re splitting what we know as the “professional disc golfer” and splitting it into the professional and semi-professional. Talk about this change and is the focus on growing the “pro” group or the “semi-pro” group. Or both?

“Professional is a multidimensional term. As we know, there are only a handful of people who can tour as a pro. Disc Golf World Tour’s mission is to create opportunities, both players and businesses to grow towards professionalism. I’m sure that we are just started. We drive the tour towards the future, where most of the touring players can enjoy their lives as a professional disc golfer. There will always be this semi-pro level, where talented players compete on a local or national level, but have their ‘other life’ attached to 9-5 jobs. We want to grow the real pro level. That is the most visible level and easiest to market through events.”

Even with the focus on the pros, you left the word “professional” out of the title of the tour. Was this done on purpose?

“Yes. As in many other sports, there is no question whether NBA or NFL athletes are pros. Our organization’s message needs to be clear.”

Many tournaments use slightly different formats and it can really play a role in the outcome of an event. Some use four rounds while others have five to six, or they add in a Final 9 to close things out. Will the DGWT events use the same format across all events?

“Formatting has been one of our main interests. I think we need a better, and more efficient, format for pro level disc golf. We are going to see a little different event format on the Disc Golf World Tour than in regular major event. Most of our events will be 3-days and all of them are played on one championship level course with a one-round-a-day format. We want to create standards where everybody (from players to fans) know what to expect from the events.”

Along those same lines, there has been a debate for a while now if it is better to play the same course over the entire tournament or to hit multiple courses to showcase different styles of play. Will there be any regulations along these lines too? Do you have a personal preference?

“Yes, absolutely. As said, always only one course per event and one round per day. That way, we are able to concentrate to the quality over quantity. My personal preference is obvious—we need quality. Most successful events are already like this.”

Will the payout for the pros in these events be similar to what we have today, or will we see changes? What about support for tournament directors and others involved with the tournament? Will there be support built in for them?

“Money is always a factor. We will standardize winning shares on tour. They ranges from $2,500 to $10,000 depending of an event. We plan to pay out similarly whats seen in the top events.”

“So, Disc Golf World Tour will concentrate its resources to promote the sport. Each event promoter (we want to call them like that) will have a huge support package in terms of PR and media service, course equipment and event service. The Tour will take away all the pains from registrations, payments, scoring, etc. There will be opportunities to local event promoters to get compensations from their work. The biggest issue for me—as a long time event promoter—is the fact that we come always the last.”

Another big part of the DGWT will be focusing on an audience outside the walls of disc golf. This is not just in terms of fans, but also in the idea of advertisers and supporters. Let’s start with the fans though. What efforts are being made toward people who aren’t necessarily into disc golf themselves to help them be attracted to the DGWT?

“There are plenty of good things on the horizon. We have created a real nice statistic tool for Disc Golf—the Disc Golf Metrix. It will raise the following of the event into a whole new level. At the Disc Golf World Tour you can follow your favorite players stats in multiple areas, like greens hit, putting-%, etc. Along with stats, we will roll in multiple platform media to each event to cover the highlights and round coverage. Generally we will produce more material from each event to be consumed.”

Many of the big disc golf tournaments are sponsored by disc golf companies. Disc golf money supporting disc golf. There is only so much to go around though. The idea of getting external support has been a common theme. How much of your time and efforts will be devoted to helping the sport grow from the outside instead of focusing internally?

“The whole supporting idea behind Disc Golf World Tour is to connect this sport to ‘outside world’. We are currently at the starting point and we need to prove ourselves. That will take some time but I’m sure the opportunities will come. We have a 5-year plan in place.”

We can’t discount the internal support as well. What kind of support do you have from inside the disc golf family?

“At the start, Disc Golf money is vital for us. When I first had this idea in some sort of written form, I went to Dave Dunipace and Harold Duvall. These guys are the biggest reason why there is this great sport of Disc Golf as we see it today. They created the modern disc, brought the sport from the woods to the parks and created USDGC—the window of our sport. Honoring their efforts and dedication, I went to them and suggested 2-year cooperation. Without their support, I would not be here writing this. I walked away from that meeting with 6-figure deal and the future in my hands.”

You can’t go about this plan by yourself. How many people do you have involved working on the DGWT?

“Disc Golf World Tour is owned and operated by Spin18 Ltd. We are new, independent promotion company of 4 people. We have offices in Helsinki, Finland and Rancho Cucamonga, California. We plan to hire 1-2 people in the next 12 months to support our growth. This is really exiting venture where we try to create business in a very challenging area: Disc Golf Promotion. When we go to the event level, our staff will exponentially grow. Our regular event staff will be somewhere between 50 and 100 people. Every single event requires a lot of volunteer work and dedicated people.” 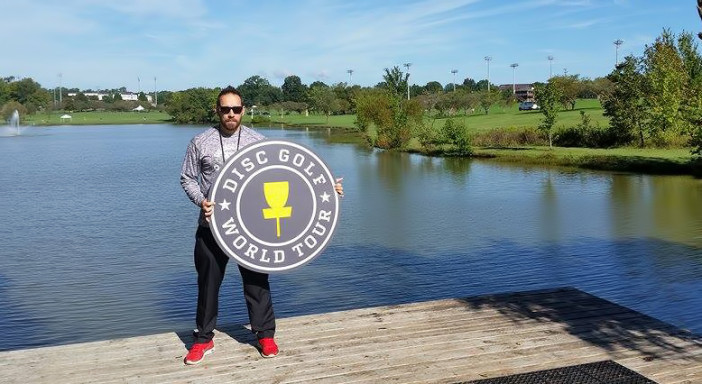 Jussi Meresmaa stands on the teepad of hole 5 at the USDGC.

“In 2016, we plan to run six events. Five are already set. Our season starts in March from the legendary LaMirada in California and ends in Rock Hill and the USDGC in October. We’ll go to Europe three times where two of them are in new fast-growing market areas (Czech Republic and Estonia) and the European Masters in Stockholm, Sweden. Finally, we are planning an event to be held in September in the US, but we have not set that location and promoter yet.”

“In 2017, we plan to add 2-3 more events to tour and expand it to Australia. Both years, we are going to have the Championship event on Rock Hill.”

You’ve been working on this announcement for a while and when you first shared the news with us, we could instantly see your vision. We know the work is far from over, but how exciting is it to finally announce the Disc Golf World Tour with everyone?

“Well, this whole thing has been on my mind for more than a year and working with a concept this magnitude is always exciting. There is so much more we have planned, but we want to start somewhere. This announcement is one part of the plan what started when I announced my retirement from the pro play. I haven’t been more motivated ever.”

How can people keep up with the latest DGWT news?

The moment Meresmaa finished with his presentation to us, we could tell how excited he was about this. You could easily jump in with 20 events around the world and you would burn yourself out in no time. A solid foundation is what the DGWT needs and it is exactly the path Meresmaa and his team are taking. It already has the leadership and the vision, now it just needs a little time to bloom.

You can expect more news about the DGWT soon and, as always, ATDG will have full coverage.