You are at:Home»Instruction»5.5 different reasons to practice putting in disc golf

Conventional wisdom says putting is a crucial facet of any successful  golfer’s game- and conventional wisdom is correct. No one who has ever spent a round crushing long, accurate drives only to score poorly because he couldn’t hit a putt would argue. Yet few players practice putting with a purposeful, regular routine.

If you’re reading this you are likely someone that has at least a moderate desire to shoot lower scores on the disc golf course. Therefore, if you’re not systematically working to improve your putting skills and consistency, the question is why?

One logical answer is that you’ve never heard a specific reason or reasons that resonated strongly enough with you personally. It’s one thing to agree with the logic in a general, vague sort of way and quite another to be able to connect the dots with a straight line that leads directly to a result you value highly. Therefore, the below 5.5 reasons to practice putting in disc golf are presented as a means of motivating more players to create and stick to a putting practice routine.

This is the main reason to practice anything in sports. The bottom line. The ultimate quantification to judge whether practice is translating into desired results. It’s also where most players’ understanding of why they should practice begins and ends. In this case, we practice putting because the better the putting success rate in a given round, the lower the score. This is observable, cause-and-effect, incontrovertible truth. Hit the putt and you’ve successfully completed that hole and can move on to the next one. Miss it, and (at least) one more stroke is added to your score.

Which brings us to the relationship between practicing putting and improving one’s putting success rate in actual rounds of disc golf. Have you ever thought beyond the fact that practicing something makes you better at it, and asked yourself why? In golf, due to its unique psychological components, the explanation goes much deeper than simple cause-and-effect. Consider the next 4.5 points, which are really sub-points to this first no-brainer. Also, take note of how they either build on or connect to the other sub-points as well as this first basic fact.

Naturally the more you practice something, the better you should get at it- with ‘better’ in this context being defined as being successful more often (making more putts). Nothing gives a person confidence they can accomplish something like knowing they’ve accomplished it many times before. Therefore, practice should result in improvement, improvement is defined by more made putts, and more made putts will naturally increase confidence in future putts.

The second part of the maxim ‘Practice like you play, and play like you practice’ alludes to this. If you’ve put in the practice hours and repeatedly experienced what it feels like to hit that 20-footer, when it comes time to do it in a round you’ll be armed with greater confidence. ‘Play like you practice’ is meant to be a reminder during a round that you’ve made this putt many times in practice, so just do now what you do in practice.

This point probably isn’t a big revelation to you either. Naturally experiencing more and more success will give a person increased confidence. But what, specifically, does that mean? Are there additional, ‘collateral’ benefits as well? Turns out there are!

The mental game is key to success in any sport, and in golf it’s nothing short of crucial. Confidence is one component of a good mental approach to golf, for reasons stated above. It gives a player the belief she can make the putt she’s about to attempt, enabling her to credibly visualize the successful attempt. But it also benefits the player through something that it eliminates or greatly reduces- namely stress.

Players who get emotionally invested in a competitive event (tournament, tag round, whatever) have a palpable yearning for success on each throw. With that comes an equally strong negative reaction when things don’t go well. Without confidence, this translates in putting (especially on putts we think we should make) to a dread of missing. Being able to conjure up the memory of thousands of made putts of the same distance during practice time and previous rounds acts like Valium or Xanax on this kind of stress.

This is very important over the course of an entire round, much less a tournament spanning three or four rounds! Playing focused golf for hours at a time requires an enormous amount of mental focus and emotional energy, and stressing out over every throw quickly takes a toll. Practice results in confidence, and confidence results in less stress (and less misses, which also means less stress). 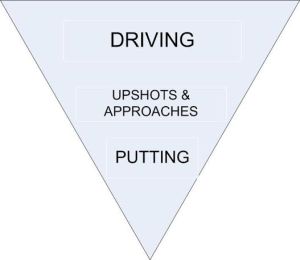 This inverted pyramid illustrates how all other types of disc golf shots are dependent upon and affected by one’s putting game.

Smart disc golfers always consider the ramifications of the next shot before they decide on a disc, route, or approach. A basic example would be a right-handed player throwing backhand not choosing a super overstable disc on a left-to-right dogleg with a lake all along the left side of the fairway. That’s using logic to determine that a disc which will hook left into the lake is not a smart play. This logic extends to other variables as well, and the player’s capabilities should always be among them.

In this sense shot selection is like an inverted pyramid with putting at the tip of the pyramid and driving at the base (which in this case is on top, since it’s inverted or upside-down- see illustration). With each shot selection determined at least in part by what the player is realistically able to execute on the following throw, the options on an upshot and sometimes on a drive are based on the player’s putting ability. Consider the following example: 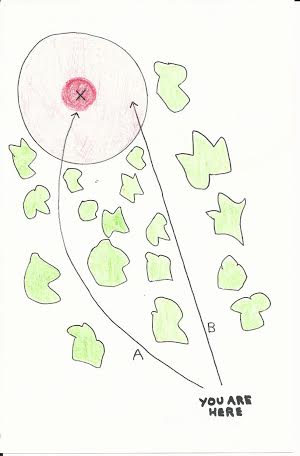 In this diagram, route A can get you right to the basket, but it’ll be tough for even a very skilled player to pull off and odds of execution are small; Option B is a more realistic option in terms of executing the shot, but will only get you within 25 feet of the basket.

You shanked your drive on a par 3 hole into the rough, and are looking at numerous trees and bushes between you and the basket, which is only 80 feet away. There are several routes to consider, with none of them being routine. You’re obviously hoping to get up and down for a par. If you have confidence in your ability to hit putts from 25 feet and in, you can imagine a 50-foot diameter circle with the basket in the center, then look for the highest percentage route that gets you anywhere within that circle (route B in the diagram).

If you don’t have any confidence in your ability to make putts (but still hoping to save par), you’ll instinctively limit your consideration of routes to one that will let you get right to the basket (route A)- even if the odds of executing that upshot are small.

So in this case, practice results in confidence, which in turn results in more options on the preceding upshot, which results in choosing a higher-percentage shot, which results in a putt you can make due in part to confidence, due in large part to practice. And to take it a step further, the stress reduction mentioned in 2.5 also applies to your reaction to shanking your drive, because you had the confidence that you’d at least save par due to the fact that your upshot only had to get within 25 feet of the basket (hey, you hit those putts all the time in practice!). That’s the inverted pyramid on shot selection.

4. Psychological warfare (but the pacifist kind)

Disc golf is a played largely within your own mind (see famous Bobby Jones quote), as it’s just you against the course and the elements. It never pays to get wrapped up in what competitors are doing or saying, or how they are playing. Competitively, when it comes to other players the best thing you can do find is a way to enclose yourself in a bubble and allow only neutral interactions with others inside (like reporting scores on a hole, or responding politely but succinctly to casual chit-chat). If others can’t help getting wrapped up in you and your game, though, it’s no fault of yours. And the truth is, some players (to their detriment) allow their game to be affected by the play of others.

When such players see a competitor who not only hits most of his putts but seems to know he’s going to hit the putt as soon as he places his mini on the ground, it can get to them.

In this case practice leads to confidence, confidence leads to less stress, less stress leads to a calm, controlled demeanor, and that ‘never let ’em see you sweat’ demeanor leads to added stress for the other guy. Don’t feel bad! It’s not like you were trying to psyche the guy out. You’re just playing your game. What he perceives and how he reacts is his deal.

This one has much more science to back it up. The Wikipedia entry for muscle memory has a great, succinct definition of the term which says in part “When a movement is repeated over time, a long-term muscle memory is created for that task, eventually allowing it to be performed without conscious effort. This process decreases the need for attention and creates maximum efficiency within the motor and memory systems.” Go to the wiki page if you want to understand exactly how it works, or just accept it as fact. The more you practice something (assuming you get to the point where you’re doing it correctly and getting the results you want), the easier and more automatic it will become. In a sense, muscle memory is part of the confidence that grows from practice, or at least it is the fertile soil that gives it the best chance to grow.

I guess there is one more reason to practice putting. Fun! Have you ever seen the bumper sticker that says ‘The worst day fishing is better than the best day working’? If you love to play disc golf, committing 15 minutes a day to practice putting in a purposeful way can’t be too much of a sacrifice. This post isn’t about what kind of routine yields the best results, or which routine makes it the most fun or interesting. This is all about helping you to understand the many reasons it’s worth the while.