You are at:Home»Tournaments»2016 European Open comes down to final hole

What a day at Nokia! After 2 days of scorching hot temperatures, by Finnish standards that is, the final day brought us substantially colder air but still plenty of sunshine and no rain whatsoever. The wind was pushing hard again, forcing the players to give their full concentration on disc and line selection on every shot. On a course like The Beast, you’ll get punished for every mistake and even a slight lapse in concentration may quickly turn your tournament upside down. 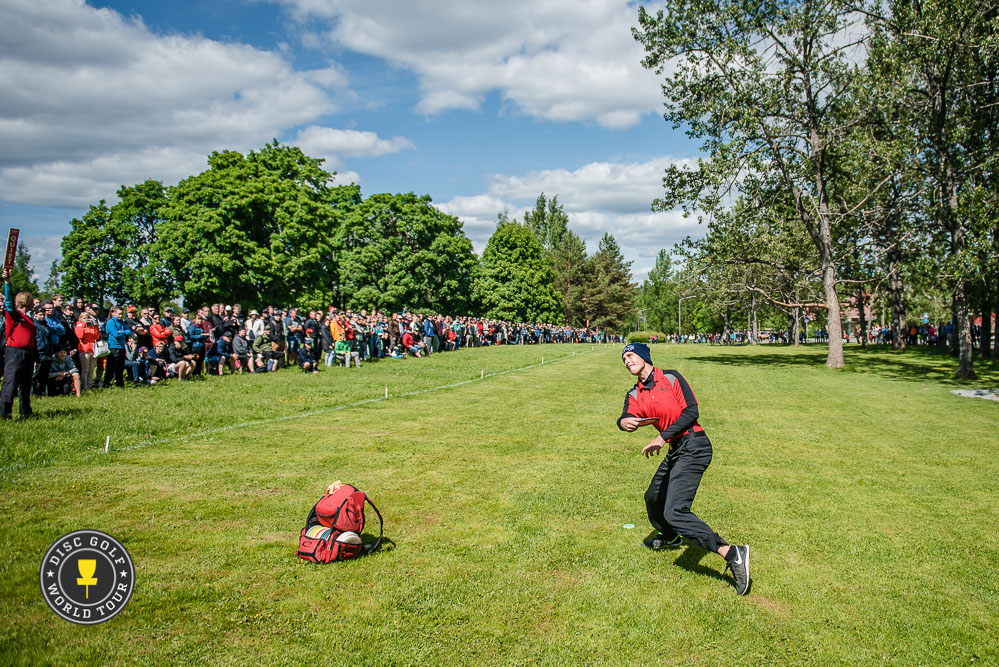 The situation going into the final was as thrilling as it gets: Going into the week with 4 consecutive tournament wins under his belt, Ricky Wysocki (USA) was on the lead by one shot. Only a single stroke back from Ricky, on the 2nd place there was crowd favorite and EO veteran KJ Nybo (DK), with the German sensation and DGWT Konopiste Open 2016 championSimon Lizotte just one stroke behind KJ. Behind these three gentlemen there was a certain two-time EO winner and 4-time World Champion Paul McBeth (USA), who’s “beastmode” during the final day we’ve seen to bear fruit on more occasions than most of us remember.

After the first 4 holes of the final, Wysocki had been able to stretch his lead to 6 over McBeth, 3 over KJ and 4 over Lizotte. At this point some of the spectators had already counted McBeth out of the competition. From holes 5 to 14, our gallery of way over 1000 people witnessed Paul McBeth’s beastmode kicking into high gear. It’s not that anyone else in the group would have played bad. On the mid-section of the course Paul was simply unstoppable. Paul would go on to hit ten birdies in a row, from hole 5 up until hole 14. On the first 9 of these holes, Paul would have a 100% green hit percentage, which by itself speaks volumes of the level of execution we witnessed from McBeth today.

It’s not over until it’s over

Paul’s 10-birdie streak landed him 2 strokes ahead of the competition going into the extremely challenging final 4 holes of the course. As we’ve seen countless times before, there’s no calling winners on The Beast until the very last putts are have been casted. Sure enough, all 4 players of the lead card would end up going OB on the 15th hole at least once. Out of the foursome, Ricky would be the only player to save his scorecard from a bogey on the 15th, putting him one behind Paul with 3 holes left to play.

Unlike last year, this time Ricky was able to card a solid birdie on the 16th, the very hole that cost him the victory last year. McBeth on the other hand was lucky to have his disc skip in over the hay bales for a tap-in birdie.

Wysocki ties the lead on 17th

Still one shot behind McBeth, Ricky Wysocki would have the tee first on the 17th. After going OB wide right yesterday, Ricky would make the correction today and ride the left to right tailwind all the way to the basket with his huge sidearm shot on this extremely challenging 140 meter (460ft) downhill Par 3 with the basket surrounded by OB on all sides but the fairway. Ricky’s tap-in birdie would bring him tied to the lead with McBeth, who played hole 17 according to his game plan, carding the par 3 from the 17th.

After gaining 2 strokes on McBeth on holes 15 through 17, Ricky would be the first to tee off on the legendary 211 meter (692ft) Par 4 “video game hole” 18. According to our Disc Golf Metrix course statistics, the last hole was the most difficult again this week of all 18 holes on the course, with the average score of 4,96 for the whole week. The difficulty of this hole was witnessed by Wysocki, who’s sidearm drive sailed OB left of the tee. Paul McBeth was 2nd to tee and seized the opportunity handed by Ricky by landing his drive on the middle of the fairway. 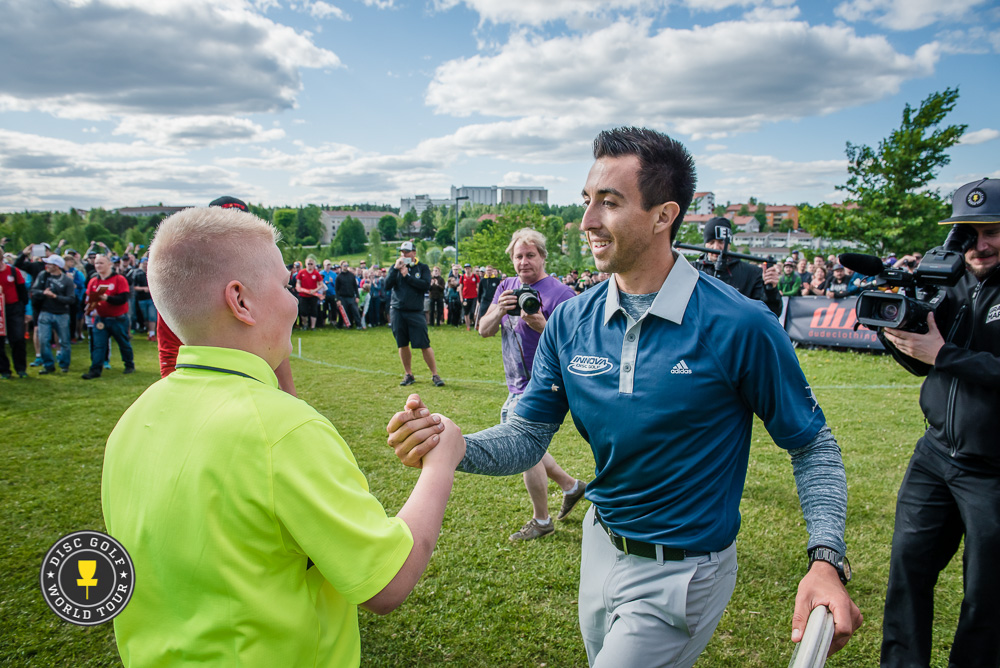 Wysocki would eventually go OB again with his lengthy upshot, leaving Paul with the easy task to play the safe par, cruising to a 2 stroke victory over Wysocki, who missed his last putt from about 6 meters. Paul’s 11 under par for round 3 was the hottest round of the whole tournament.

Playoff for the 3rd place trophy

Behind the Americans, KJ and Lizotte would end up being tied for the 3rd place after full 54 holes of play. They would go on to settle the 3rd place trophy winner in a playoff, starting on hole 16. No more than one hole was needed this time to conclude the playoff winner, as KJ’s first upshot towards the island green would skip long and off the island, while Simon almost eagled the hole by hitting the cage with his sidearm approach. After his great upshot, Simon was left with the easy task to tap in his birdie to take home the 3rd place trophy.

Piironen and Koivu climb up the scoreboard 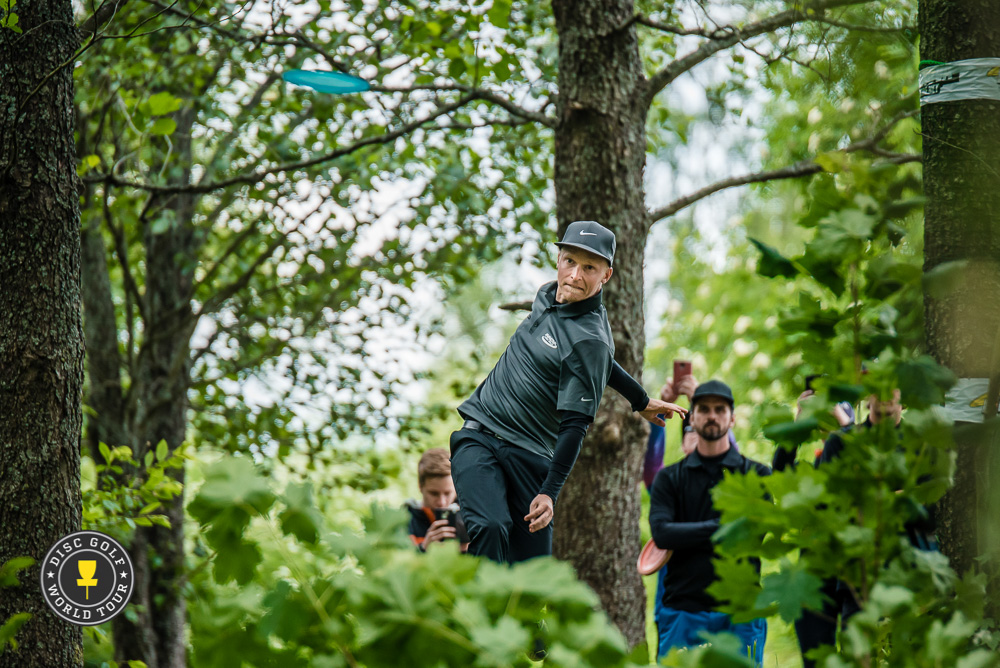 Pasi Koivu bounced back nicely today from his collapse on the island hole on round 2. (Photo: © European Open 2015, Spin18 Ltd)

Behind the lead group, Leo Piironen (FIN) and Pasi Koivu (FIN) had great endings to their tournaments with Piironen returning a neat bogey free scorecard of -9 and Koivu wrapping up his round with a -7. Koivu would take the 5th place in the event, with Piironen on the 6th. The top ten was completed by more Finnish talents: Ville Ahokas and Seppo Paju (tied 7th), Lassi Hakulinen (9th) and Teemu Nissinen & Janne Hirsimäki (tied 10th).