With thousands on hand to watch disc golf’s best, 11 people were crowned Disc Golf World Champions in the Pittsburgh area on Saturday. The day began with the 18 hole semifinals before the top cards advanced to the Final 9 at Slippery Rock University.

The crowds saw just about everything you could hope for at the 2015 PDGA World Championships. A domination in the Men’s Open division, a battle of emotions and more in Women’s Open, an exciting rally in Men’s Masters, and so much more.

Even though there was a full 18 hole round in the semifinals and a final 9 for the top four still in front of the Men’s Open field on Saturday, many believed that the end result was a foregone conclusion. After trailing by eight shots at the end of play on Wednesday, Paul McBeth used two record setting rounds on Thursday and Friday to move into a commanding eight shot lead over Ricky Wysocki. McBeth’s advantage was even stronger on the rest of the field with Will Schusterick 11 shots behind McBeth and Nikko Locastro 14 back heading into Saturday’s final day of play.

Even with the comfortable cushion, McBeth didn’t slow down in the semifinals at Moraine State Park. McBeth again shot the hot round and actually extended his lead over Wysocki to 12 after shooting a -13 (53). His round featured 11 birdies, one eagle, and no bogeys. Wysocki and Schusterick also had bogey free rounds but combined with McBeth’s lack of errors and fewer birdies, they just couldn’t dig into the deficit.

Nikko Locastro entered the semifinals in fourth place, but it was Steve Brinster shooting -10 (56) to leap frog Locastro to jump into the top for and secure a place in the final 9 at Slippery Rock University. Locastro finished in fifth, just one shot off of fourth place and the coveted final 9.

The foursome of McBeth, Wysocki, Schusterick, and Brinster hit Slippery Rock University for what was more of a ceremonial final 9.

With McBeth having a firm hold on first place, the battle was really between Wysocki and Schusterick for third. After a bogey start on Hole 1, Schusterick birdied the remaining holes in the finals, but even that effort would leave him one shot behind Wysocki and would finish in third. Wysocki, for the second straight year would finish in second place, but he was able to cut into McBeth’s lead and finish only nine shots back of the leader.

Fan favorite Steve Brinster rounded out the top four in the finals and wasn’t able to improve his starting position in the final 9 holes.

It seemed like it was only yesterday when McBeth raised his first World Championship in Charlotte, North Carolina and now he has his fourth straight.

While last year’s tournament had maybe the most exciting finish, this year was clearly a showcase on just how good McBeth is. Coming from eight shots behind the leader to virtually making the final 9 an exhibition is quite the feat. When will this streak end? Can he remain healthy and finally tame the United States Disc Golf Championship? Just how good can Paul McBeth become? Only time will tell and we can’t wait to watch!

Friday will certainly be a day that Sarah Hokom never forgets after the horrific car accident that left her bruised and battered. It’s safe to say that Hokom wasn’t the only one who was affected by the accident. It was on the minds of many.

Even after the accident, Hokom battled hard to remain in a tie with Catrina Allen heading into Saturday’s semis. They had company though with Paige Pierce one shot behind them and Valarie Jenkins three back.

The women were also at Moraine State Park for their semifinals and it was Catrina Allen and Paige Pierce coming out hot as they carded a birdie on four of the first five holes. Hokom though struggled with only two birdies in the same span of holes and we quickly saw the leaderboard shuffle begin. As the round went on though, Allen only carded one birdie for the remaining 13 holes while hitting four bogeys.

Pierce and Hokom traded the lead back and forth the rest of the round with Pierce carding the slightly better -6 (60) to Hokom’s -5 (61) as the pair went into the final 9 tied -3 overall. Allen sits at +1 in third while it will be Ohn Scoggins making the leap up to fourth place to round out the final card. Jenkins struggled in her semifinal round as she finished at +5 (71) and will finish the tournament in seventh place. Ragna Bygde finished the tournament in fifth with Sarah Cunningham, who led early, ending her bid for the title in sixth.

With Pierce and Hokom tied heading into the final 9, the action moved to Slippery Rock University to determine the winner.

On the first hole of the finals, Hokom’s putt sailed and landed out of bounds leading to a bogey and giving Pierce the one shot lead. Hokom tied it right back up on the next hole as she was the only one who carded the birdie-two.

After Hokom and Pierce traded pars on Hole 3 and birdies on hole 4, the pair went to Hole 5. Hokom’s drive landed out of bounds and left her with a tough second shot as Pierce’s drive landed safely in bounds. After Hokom got out of trouble after taking the penalty shot and found herself laying four with Pierce looking to take advantage.

It was at this point when Pierce threw her upshot and saw it sail out of bounds instead of the predictive fade at the end of the flight. Pierce was now laying four and needed the putt to save par as Hokom was looking at a difficult putt for bogey herself. The par attempt from Paige hit center chains but also hit the pole hard enough to bounce back out landing just below the basket. Hokom nailed the tough bogey putt up and over a handrail as the duo both walked off Hole 5 with bogeys on the scorecard and still tied for the lead.

Hole 6 is where the championship was ultimately decided. Hokom was looking at a birdie putt, but was not able to make it after a lengthy upshot. Pierce took advantage and hit her birdie to take the one shot lead.

Holes 7 saw Pierce throw her upshot long and left herself with a long putt for par. A miss would have meant Hokom had a chance to get the stroke back, but Pierce nailed the clutch putt and held on to her one shot lead as Hokom equaled the effort.

The last hole of the Final 9 was Hole 12 at SRU. Two big drives landed in the fairway and Hokom’s second shot landed just outside the circle giving her a chance at the birdie to put the pressure on Pierce. Pierce’s second shot faded early and left her in the first cut of rough looking at a long approach putt to clinch the title.

Hokom lined up her attempt and missed it to the right. As she turned around from the putt you could tell she accepted the fact that this would not be her day. Pierce walked up to her shot and laid up knowing she can safely take the four on the hole and still win her third World Championship.

As Pierce walked up for the final putt, tears were in her eyes as everyone could sense the bittersweet end to the tournament. She made the putt, waved to the fans, and took a moment to collect herself after a big hug with Hokom.

With tears in here eyes, Paige Pierce taps in for the win. #2015proworlds pic.twitter.com/Q5tab0PHMW

After the live broadcast followed her for a few moments, Pierce gave a quick interview and said, “She (Hokom) should have won this. It’s not right.”

Hokom held a six shot lead going into play on Friday before that horrific car accident. If those penalty strokes, which are part of the rule book, weren’t factored in, Hokom would have walked away with the championship instead.

Pierce knew she needed to stick to the integrity of the game and play out the rest of the tournament accordingly, but seeing the emotion on her face shows just how much the events of Friday impacted many on the course.

Congratulations to Pierce and her third World Championship. Even in the circumstances, she is still very deserving of the award. 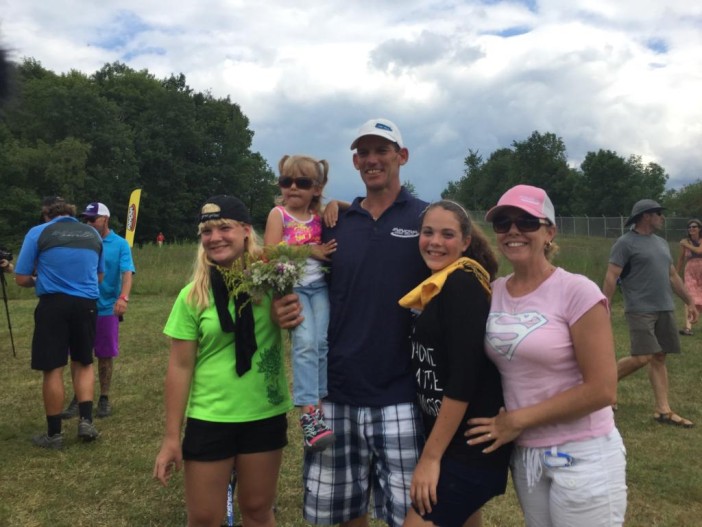 Patrick Brown entered the semifinals of the Masters division with a four shot lead over Ken Climo, but it was Climo with the momentum after cutting into Brown’s lead in the final holes of Friday’s action.

Held at Slippery Rock University, the semifinals were filled with fireworks as Climo shot a -11 (56) and Brown only a -8 (59) to see Brown’s lead shrink to just one heading into the finals. Climo’s round included one bogey and one eagle, but it was Mike Moser jumping from from seventh and into the third place slot after his own -11 (56). His round of 12 birdies and one bogey helped him secure his spot in the finals, but still remained nine shots behind Brown.

Jay Yeti Reading, who has been at the top of the leaderboard for most of the tournament used an ace on hole 9 to help push him into fourth and the final slot of the finals with his -8 (59). Scott Stokley will end his Worlds run in fifth after a triple-bogey on hole 7 pushed his score high enough to miss the finals by one shot.

As the finals began, Brown’s one shot lead over Climo certainly had the spotlight. The pair both hit birdies on the first hole and pars on the second as Brown remained in the lead.

Hole 3 is where Climo started to hit his groove and really laid on the gas. Climo’s birdie on Hole 3 moved him into a tie with Brown after Brown could only achieve par.

Hole 4 saw the pair trade birdies as the play moved to Hole 5 with the score still tied and just five holes to play. Climo finally found himself in the lead with his birdie compared to Brown’s par.

Pars on Hole 6 lead to Hole 7 where the title was decided. Climo continued the hot play and hit the birdie on the difficult par 5 as Brown was forced to take a bogey. With just two holes to play, Climo now held a three shot lead. The pair matched birdies on hole 8 and pars on the last hole to give Climo his 3rd Men’s Masters World Championship and his 15th overall.

Congratulations to the other winners in the eight other divisions competing in Pittsburgh!

Full results can be found at PDGA.com.