You are at:Home»Tournaments»McBeth, Pierce, Climo all claim another Memorial Championship 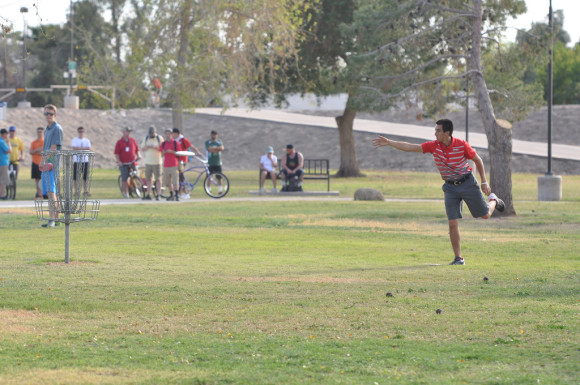 Heavy winds, torrential rain, and even a lightning delay during the 2014 Memorial Championships added to the thrill and spectacle of top-tier competition from disc golf’s top pros in the men’s open division. Surprise members of the top and chase cards came and went as the winds knocked down putts while rain washed out fairways and lightning put on a different kind of show then we are accustomed to at Vista del Camino and Fountain Hills.

The first round of play at Vista del Camino saw none of nature’s diabolical threats with fair weather throughout the day. The men’s final card on day one included Nate Doss, Paul McBeth, Will Schusterick, and Nikko Locastro who was fresh off his win at last week’s Gentleman’s Club Challenge. Putting difficulties plagued each player equally with low putts being the typical finish even inside the circle. Outside the circle, McBeth and Doss were more consistent, and with frustration building throughout the round for Schusterick and Locastro, McBeth and Doss finished the day with 51 strokes within the top-15 overall. The first round was lead by Californian Philo Brathwaite with 48 strokes, who had eleven top-10 finishes in 21 tournaments last season.

The second round featured stronger performances by Nate Doss and Will Schusterick compared to their first round scores with 49 strokes each while Brathwaite fell out of the top spot with an upsetting 60 strokes. Young gun Drew Gibson was tied with both Schusterick and Doss with a two-stroke improvement on his first round. Paul McBeth kept himself within striking distance of Gibson with 51 strokes. Jared Roan, the 2013 National Collegiate Champion, made his move to the top five with 50 strokes. The wind became the tipping point during this round as putts were knocked down and discs were tossed into OB water on multiple occasions.

Third round action saw top performances by Locastro who had, until the finals a tournament-low 47 strokes, while Gregg Barsby and JohnE McCray made their way to top-4 rounds alongside McBeth with 48 strokes. Distance champion David Wiggins was in the mix as part of the top card beginning the third round, but the OB and errant putts got the best of his abilities.

The final round lead card resulted in a return to the top for Paul McBeth, who shot a blistering 17-under par, 1132-rated final round to finish second at last year’s Memorial, as well as Jared Roan, Drew Gibson, and veteran JohnE McCray. Following from behind were Nikko Locastro, Nate Doss, Will Schusterick, and Steve Rico. Consistency in the finals was on Rico’s side, where he shot his tournament best 50 strokes, but it wasn’t enough to bring him out of a tie with Roan and Cale Leiviska for fourth place. Drew Gibson finished third ahead of many seasonal favorites like Rico and Leiviska as well as Doss, Schusterick, and David Feldberg. JohnE McCray, following his win at Throw Down the Mountain, finished five strokes behind McBeth to land in second place.

McBeth’s dominating performance aside, the changes near the top were unexpected. Perennial names and top-rated players have given way to a new set of disc golfers, from seventh-place finisher Simon Lizotte, who is on his first tour in the U.S., to Jared Roan and Steve Brinster, an experienced pro under his first national spotlight following his 2013 United States Disc Golf Championship win. 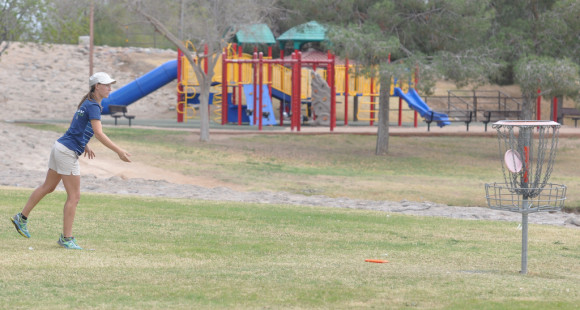 In the women’s division, Paige Pierce had a decisive ten stroke victory over second-place finisher Catrina Allen, carding the top score in rounds two and three. She also recorded a 1042-rated round at Fountain Hills, the only 1000-plus rated women’s round besides the 1042 achieved by Allen in the first round at Vista del Camino. Her considerable lead among the four players on the lead card on the final day made for an interesting and well-fought race for second place. Pierce’s win makes for her second consecutive Memorial title following a difficult fifth place finish at the Gentlemen’s Club Challenge. 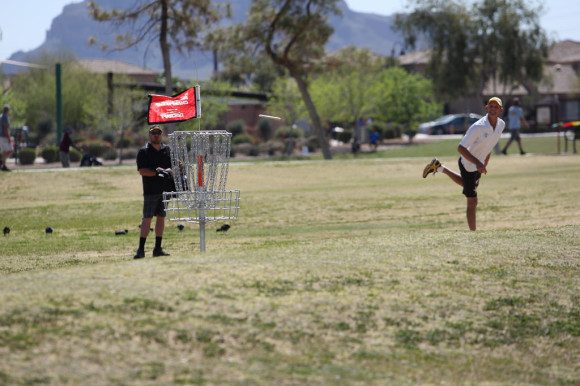 Looking forward to the Texas State Championships at a potentially windy Old Settlers’ Park in Round Rock, we can expect performances by the favorites, but who among the newly emerging disc golfers can prevail? We’re looking forward to performances by McBeth and Pierce among others, but what would disc golf be without the new touring pros toppling their celebrated competition?