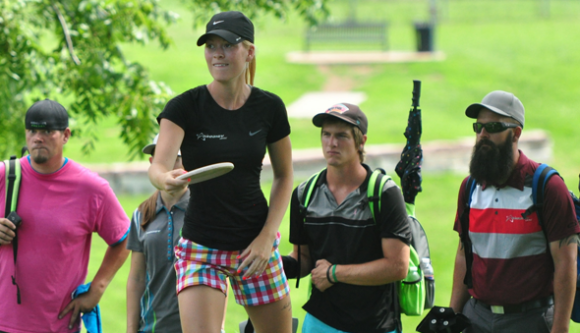 Editors note: PDGA professional Ragna Bygde has partnered with All Things Disc Golf to guest author this post from her experience at the 2014 Kansas City Wide Open. Thank you to Ragna for helping out ATDG!

Coming into Kansas City for the Kansas City Wide Open is always a mixed emotional platform. It’s a vibrant, exciting and beautiful city, but also has its rough parts. For a European it’s always mind blowing being a witness of the fine lines between societies different layers. Little did I know that some of the most beautiful courses are right in the neighborhood where I wouldn’t walk alone at night or where stories about drive-by shootings originate from.

The excitement to be playing some beautiful courses mixed with the minor anxiety to be walking, not even playing,  Blue Valley Park all stirred into the huge pot of cultural disorientation makes it for what could be a pretty intimidating experience. But with all that is scary, there’s a opportunity to conquer.

The schedule for this year’s PDGA National Tour stop in Kansas City had a few changes with the beautiful waterworks taken off the roster for the pro divisions, along with Rosedale. Instead the long WYCO, held together by a corset of OB lines introduces itself and the opportunities for some big D, in true Kansas golf spirit, open up.

The wind died down for the tournament a fair amount compared to the practice rounds and the vast amount of OB lines became less intimidating and doable. Eight women are played this year and after a beautiful day out at WYCO, Catrina Allen takes the lead with Valarie Jenkins just 3 strokes behind, Paige Pierce 4 strokes and myself 5 strokes. With a tight finish after the first round we all knew Blue Valley was coming up and oh boy does that sound like an energy drainer.

Although I am not sure I speak for all of us when I say that my excitement about playing Blue Valley was minor. Second longest course in the world on a humid weekend is never an easy task and rarely fun. Even though the total arrangement is top notch, this course is not among the best and I believe that a KCWO without Blue Valley would be beneficial in growing the sport and the amount of players participating. A long and winding course like Blue Valley is a physical challenge for the whole field and the big arms come in handy. After a lot of ups and downs and some high speed driving, Paige Pierce made a move and started gunning for the top spot with the hot round of the day. Valarie Jenkins remains in third after a solid second round.

Ah, Sunday-funday at Swope Park where anything can happen! Right of the bat, Paige was playing incredibly stable and not only slowly took, but increased her lead at a steady pace. Valarie also played very solid and tagged along on Paige’s success train. Despite the fact that the Kansas courses are big D friendly Valarie’s safe and steady play would stand up to any distance thrower and kept her in the game and with a good look at the win. The tricky OB lines and multiple island holes seemed to bother Catrina Allen as well as myself who where battling back and forth for the last spot in the final nine. I gained four out of the five strokes Catrina had on me. It was a struggle until the very end where I had a crawl out putt and Catrina secured her spot in the finals. Going into the finals Paige had a six stroke lead over Valarie who would charge in the finals.

Per usual tradition, the final round at Kansas City Wide Open is played in one big group with both the female lead card as well as open. Although this year, a three-way tie between Nate Doss, Cale Leiviska and Paul Ulibarri would mean a huge final group of five men and three women who would be playing a spectator friendly and anything-could-happen Final 9 at Swope.

Right away at Hole One opportunities opened up in the women’s division where Paige threw OB on her drive and Valarie played it safe in-bounds. With a missed putt Paige would take a 5 and Valarie a 3, already decreasing the six stroke lead by two. Two holes later Val would park a downhill island hole where Paige missed her drive, decreasing Paige’s lead by another two strokes.

Last year Paige lost her lead in the finals and the thought of a repeat seemed to fire her up to finish strong and keep herself in bounds and safe for the rest of the holes. Coming into the last two holes she had a four stroke lead and played professionally safe to securely finish strong with her third NT win of the year.

Paul McBeth would also start this final with a six stroke lead over Ricky who himself had a five stroke lead over the three-way tie. The battle to watch in the open finals was between Nate, Cale and Ulibarri who all fought for the top spots. McBeth played as the champion he has proven himself to be and increased his lead by another 2 strokes to finish as the winner of the KCWO for the second year in a row.

This was KCWO through a players eyes and I do wish I could have followed the Open division more closely, this is the female version of one of the biggest tournaments of the year, a side of the story that I’m excited to shine some light on.