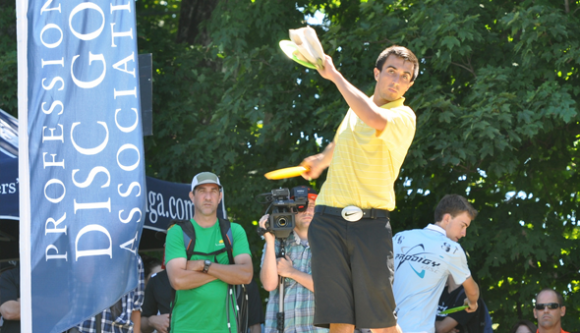 Paul McBeth entered the final round of the 2013 Vibram Open with a four shot advantage over Will Schusterick. After just five holes, the lead was up to nine and McBeth never looked back en route to to winning the tournament in record setting fashion. On the women’s side, it became a battle between Valarie Jenkins and Sarah Hokom with Jenkins hanging on for the win.

McBeth’s round quite simply be the best round of disc golf we’ve ever seen. You could argue this final round was better than his 1132 rated round in the final round of the Memorial earlier this year. McBeth started with five straight birdies and 10 of the first 12 holes. After two straight pars, McBeth closed out the round with birdies on the final four holes to record a 45 which came in at -14. Currently, the 45 is unofficially rated at 1119. While the record round at the Memorial was filled with wide open holes and sweeping hyzer shots, the Maple Hill Golf course is much more difficult with various types of shots and tighter lines that must be hit in order to record even an average round. What McBeth did was single handedly rip apart one of the more demanding courses on the PDGA National Tour.

To further put this final round into perspective, McBeth set the course record at Maple Hill by five shots. This record will be very hard to beat as time goes on. The next best rounds of the tournament were McBeth and Cale Leiviska’s 50 during round three. The next closest round on Sunday were 52s turned in by Leiviska and Dave Feldberg.

Schusterick and Cameron Colglazier each turned in a 54 in the final round. Schusterick finished in second place while Colglazier and Leiviska tied for third. Paul Ulibarri rounded out the top five.

While McBeth ran away with the lead and the $3,000 prize for first, Valarie Jenkins needed to grind out the final round to hang on for the 2013 Vibram Open title. Jenkins had a three shot lead over Kelsey Wilmerding and a four shot lead on Sarah Hokom with just 18 holes to play. After the first nine holes, Hokom was playing with the hot hand and cut Jenkins’ advantage to just one.

Jenkins was able to birdie hole 13 to stretch the advantage to two with just five holes to play. The pair would remain even until the 18th hole when a bogey by Hokom would help Jenkins secure the victory and $1,500 in prize money. Jenkins shot +3 for the round was the second best of the day. This is Jenkins’ second Vibram Open win (2008). Jenkins has finished in second place three times since 2008 and also finished in third once.

Hokom had the hot round of the day shooting +2 while Wilmerding +14 dropped her down to fifth place. Catrina Allen finished in third. Paige Pierce ended in fourth place.

The Vibram Open is also the crowning even for the 2013 PDGA National Tour Points Series. Entering the tournament, McBeth led Ricky Wysocki by just two points on the men’s side, while Pierce had a two point lead over Allen and a 12 point lead on Hokom.

With McBeth’s win, he easily locked up the 2013 National Tour Points Series title and the added $2,000 prize.

For the women, it really came down to the wire. With her third place finish, Allen was able to claim first place by just one point over Pierce. Hokom finished in third just six points back. Allen takes home the $1,000 prize for first place.

Another PDGA National Tour series is in the books with McBeth and Allen walking away with the points titles and added prize money. Just how great McBeth’s final round is will only be shown as time goes on. We expect that record to stand for years.