You are at:Home»News»2013 Thrower’s Choice Awards Disc of the Year: Dynamic Discs Judge 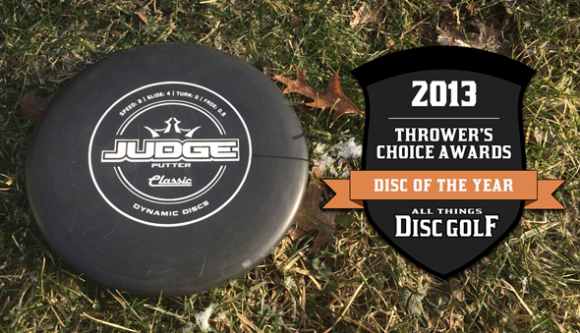 After nearly 5,000 votes were counted from 22 countries and all 50 states, you have chosen the Dynamic Discs Judge as the Disc of the Year in the 2013 Thrower’s Choice Awards! Remember, this is an award decided by disc golfers. We did not vote ourselves. This was entirely decided by the disc golf community.

The voting was very close for the first few days. After three days of voting, only 50 votes separated the top 5. As the week went on, the Judge really pulled away collecting 22.9% of the votes. Coming in second place with 16.64% was the Legacy Bandit. The Bandit was not even in the top 5 until late in the week when a strong effort was made to boost it up the ranks.

We heard a lot of feedback on people wanting to see the full list of results and your voices have been heard. The top 5 vote getters accounted for 73% of the total vote.

One of the most valuable parts of this process has been the feedback from disc golfers. We had many different ways we could have done this award and had to settle on one choice. We encourage you to provide feedback for next year’s Thrower’s Choice Awards through our contact form. We already have plans on how to improve it for next year.

Congratulations to the Dynamic Discs Judge on being named the Disc of the Year in the 2013 Thrower’s Choice Awards!