You are at:Home»News»All Things Disc Golf 2013 Thrower’s Choice Awards: Disc of the Year 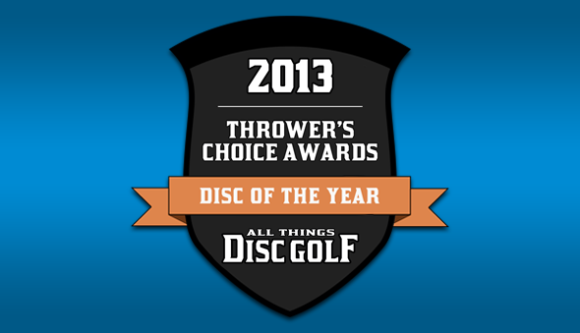 After a week of voting, the readers have decided which discs are up for the title of Disc of the Year in 2013 Thrower’s Choice Awards. Some companies had only one discs that met the initial requirements were moved straight to the finals. Only 18 discs remain and only one will be called Disc of the Year.

Finals will run until Saturday, December 21, 2013 at noon Central Time. For the finals, you will be able to vote once a day. All results will be released when the voting is complete.

You throw. You decide.

Eligibility: Discs must be PDGA approved between 12/01/2012 and 11/30/2013. Discs must also be in a full production run and available for purchase in at least one location (internet only stores are ok). Discs approved in December 2013 will be eligible next year.

Why aren’t certain discs up for the award?: There are a handful of discs that came close to making the requirements for Disc of the Year. We understand we weren’t going to make everyone happy and we had to draw the line somewhere.

The Innova Roc3, Shark3, and Mako3 aren’t up for the award. All three are still considered the same disc that was PDGA approved the first time. The Foxbat, while a CFR disc, is not in full production right now.

The Discraft Mantis (2013 Ace Race Disc) was approved on 12/1/2013 and isn’t in full production. It will be available for the award next year.

The Legacy Mongoose and Gauge along with the Westside Harp, Hatchet, and Sorcerer are all PDGA approved, but cannot be found in stores as of 12/1/2013.

Even though not every disc from Prodigy has a “production” stamp on them, you can freely find any of the molds currently for sale. They are all eligible for the award.