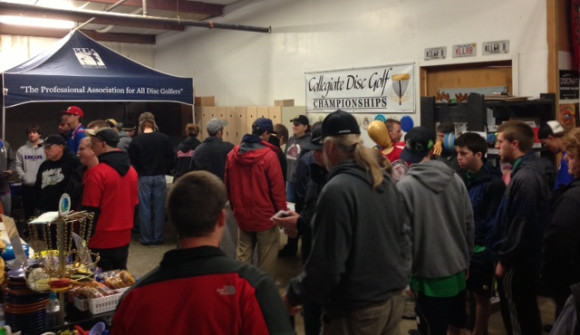 Today, the fun began. First, we received our players package with shirts, stickers, a mini, booklets, an Innova Tern and also a DGA Breaker. All schools checked in around 10am and it was raining throughout the whole afternoon. Some periods were heavier than others. Our 1:30pm Tee Time remained on the schedule. And on we played through the roughest weather you can imagine for disc golf with rain and wind. We started out by playing Alternate Shot Doubles today. However, we play with our 4 man team. 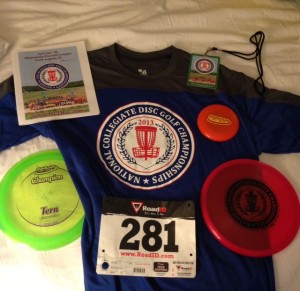 In the Championship Division, we played Alternate Shot Doubles on the Hogback course with 39 other teams. As seen by some photos in the earlier post, we played a tightly wooded course and was shielded from the rain for the most part. Although, it still played a factor for how the teams shot today. Through one round, Alabama-Huntsville seemed unaffected by any rain what-so-ever by shooting an amazing score of -16. Georgia Regents-Augusta and South Carolina both came in second place with a score of -11. There were many ties for the rest of the list of schools and CSUMB ended up with a 4 way tie for 14th with Arkansas, Murray State, and fellow California school, CSU Chico,

As for the First Flight division, the CSUMB Team 1, or “B Squad”, shot a -6 on Headrick Hills course to hold a position of 1st place. Headrick Hills was a struggle for teams due to the rain in the open field shots and the wind blowing. We had crosswinds, headwinds and tailwinds. It seemed like we never threw the same disc twice. It certainly was the hardest course to play in the wind and rain. With that said, Texas State gave CSUMB a run for our money. They followed closely with clutch putts and drives. However, thanks to excellent teamwork, CSUMB Team 1 was able to catch a go ahead birdie on Hole 18’s Par 5 that is 1,010 feet away. Texas State scored a -5 to take second place after the first round, and Mississippi State tied them for second as well. CSUMB’s Team 2, or “C Squad”, tied for 4th place with a score of -4 with Clemson.

Tomorrow, the Championship Division continues with Alternate Shot Doubles on Headrick Hills for the first round and then they will play Moody Woods for the second round. However, the First Flight Division will play singles on Hogback and Old Glory. The teams playing singles will divide up and after the rounds are finished, the scores from each person will be added up for a team score and will be added on to the Day 1 score. Based on the team’s singles scores, they will then determine the 1st, 2nd, 3rd place and so on.

Tee time for the Championship and First Flight Divisions start at 10am ET/7am PT Friday morning.

If you would like to follow the Championships, go to DiscGolfPlanet.tv and click on the Broadcasting link for the live feed of the 2013 National Championships. If you are not able to watch the live feed, results are posted at the pdga.com website. For today’s results click here.