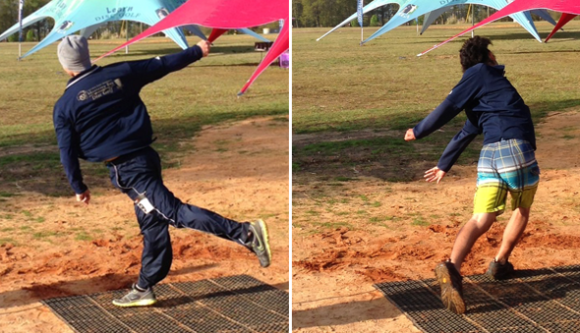 Friday certainly turned out to be a better day for everyone. The weather cooperated as well for the tournament. We had warm morning round at 10 am and our second round was at 2 pm in a pretty windy afternoon. 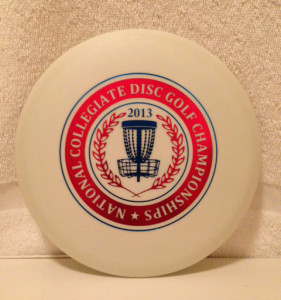 First thing of the day was a fun event from 8-9 am where they held a distance competition. These throws were some of the furthest throws we have seen. Although, we still have yet to see the pros throw their discs. Anyways, there were a lot of great competitors and they threw these discs past the 500 ft. mark on the driving range. A couple of our CSUMB guys came real close but their drives got beat out by a couple other teams. Earlier, some of us witnessed a girl in the Women’s Division throw about 400 feet. That is further than some of the guys here. She was a really good golfer. And on a side note, we each received a beautiful Innova Roc with the Collegiate Stamp on it today.

Moving on, we started our rounds. The Championship Division had another alternate shot doubles round. This time they played the other side of the Hippodrome. The morning round was at the Headrick Hills course and the afternoon round took place on the Moody Woods course. Scores from today were added onto the scores from yesterday’s doubles round. After the two rounds today, Alabama-Huntsville remains in 1st place with a -36. Despite Alabama-Huntsville having an amazing round in the rain yesterday, some other team have made up some ground and Ferris State is now in second with a -34. There is also a tie for 3rd place currently between Mississippi State and #1 ranked, Colorado State. Yesterday, CSUMB held a 14th place position and today, we shot an amazing -14 round at Moody Woods. This moves CSUMB all the way up to a tie in 7th place with Tennessee Tech.

As for the First Flight division, we had a different story. Today, we got split up to play Singles on the courses, Hogback and Old Glory. Old Glory is starting to become a favorite among quite a few of the golfers. This is probably due to a lot of the signature holes of hanging baskets, island holes and a basket in the ground. After day one, CSUMB Team 1 (B Team) held the first place position with a -6 and Texas State following closely with a -5. Today’s singles rounds separated the schools with some giant gaps at the top. Texas State turned in scorecards with two -7 rounds for the day. On top of the other good scores from their team, they moved from a -5 to an incredible -28. CSUMB held their own and with our scores totaled collectively, we are currently at a -7. The third place Georgia-Regents Augusta is sitting at a +5. There is a huge gap between three teams but anything can happen before the weekend is over. CSUMB is ready for the task ahead and we hope to make up some ground in tomorrow’s Alternate Shot Doubles rounds at Hogback and Old Glory as well as the Championship Division’s singles rounds at Moody Woods and Headrick Hills.

If you would like to see the results before the teams play tomorrow’s rounds, you can see the current standings here.

Once again, if you would like to follow your school or the Otters of Monterey Bay, there is a live feed of the National Championships at discgolfplanet.tv under the Broadcasting link on the website. Stay tuned for some intense competition to come!