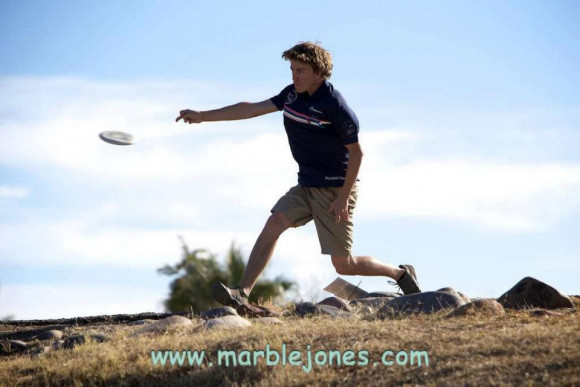 Will Schusterick throws during the first round of the 2013 Memorial Championship. (Photo: Marble Jones)

Day one of the Memorial was highlighted by Nikko Locastro shooting a blistering 44 at Vista Del Camino to take a three shot lead. At the time, the 1118 rated round would be recorded as the highest rated round ever.

The second round of the Memorial shifted to Fountain Hills. The low scoring continued across many groups as four different golfers clocked in rounds rated at 1099 or higher. Ricky Wysocki and Paul Ulibarri both carded a 43 (1099 rated), while Nate Doss and Schusterick shot a 42 (1108 rated). After two rounds, Wysocki and Locastro were tied for the lead with Schusterick in third. Gregg Barsby and Ulibarry were tied for fourth.

In the third round, Schusterick moved into a tie for first place with Wysocki after shooting a 48.

One name we haven’t mentioned yet is Paul McBeth. McBeth, the two-time defending champion of the Memorial, sat 7 shots behind the leaders entering the final day of the Memorial back at Fountain Hills. While McBeth wasn’t on the lead card entering the final round, as the day went on, the buzz about McBeth’s round started to grow. Over the course of the afternoon, it was clear that McBeth wasn’t shooting a typical disc golf round. McBeth blazed through the Fountain Hills course and shot what was simply the best disc golf round ever. McBeth carded an unbelievable 39 (-17) which was rated at 1129. Just a few days after Locastro had his 1118 rated round, McBeth took over that top spot.

As McBeth’s round ended, he still trailed Schusterick who was on his way to winning the 2013 Memorial Championship. As Schusterick made his final putt on the 18th hole, the rest of his Prodigy teammates celebrated his win. After a few minutes, news started to spread that things were not over. Schusterick failed to put a total on his scorecard when he turned it in. This resulted in a two shot penalty for Schusterick. The two penalty shots put Schusterick and McBeth in a tie and sent them to a payoff.

The women’s side of the Memorial Championship was dominated by one golfer: Paige Pierce. Paige finished the tournament with an 11 shot victory over Val Jenkins. Pierce held a 7 shot lead after the first round and never looked back.

To put Pierce’s performance into perspective, after the first two days of the tournament, she held a one shot lead on Ken Climo who was competing in the Masters division. Same courses, same teepads, same hole locations.

After previously competing at the Memorial in the Open division, Ken Climo took on the Masters division for the first time. While the standings were tight after the first two days, Climo took control of the tournament in round three with a 50. With another strong performance in the final round, Climo took a nine shot win over Jonathan Baldwin, Phil Arthur, and Rex Rogers who were all tied for second.

On the amateur side of the Memorial, the title in the Advanced division went to Nick Hanson. Hanson shot a 49 on day one to take the lead and never looked back. Day two saw a hot round from Drew Gibson after he shot a 53. Hanson on the other hand carded a 59. Hanson had a three shot lead on Gibson heading into the third and final round. Hanson shot a 55 in the last round of the tournament while Gibson was right on his heels shooting a 52 and forcing a playoff. Hanson was able to clan victory in the playoff and win the Advanced title.

Other division winners include:

Special thanks to Marble Jones for the great photos from this year’s tournament!