You are at:Home»Tournaments»2013 Memorial Championship Preview

Nikko Locastro at the 2012 Memorial Championship

Paul McBeth enters the 2013 Memorial looking to make it a three-peat. After winning his second straight Memorial in 2012, McBeth used that victory to help propel himself to his most successful season yet, highlighted by his win at the 2012 World Championships. 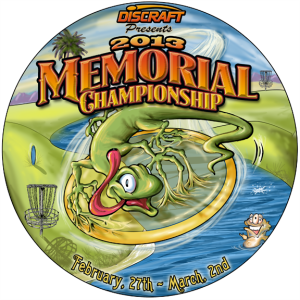 Keith Murray: It’s amazing from the small beginnings to becoming one of the biggest events on tour. It really shows how hard work from staff and support from our presenting sponsor Discraft can help make an event grow.

All Things Disc Golf: This year has a special meaning as it is being played in memory of Sue Ginnelly. Tell us about Sue.

Keith Murray: Sue was an amazing woman, mother, wife and friend. She taught me most everything I know about running disc golf events. This being the first year without her, it has been and will be tough to not have her around. All we can do is make it bigger and better and make her proud of what she helped to create.

All Things Disc Golf: The Memorial is played at two courses. Fountain Park and Vista del Camino Park. For those who have never played the two courses, what will players experience this year?

Keith Murray: They are both long, pretty open but with plenty of water to get yourself into trouble. Fountain Hills DGC looks very daunting and starts you over the water so that can really set the tone for your round.

All Things Disc Golf: We seem to remember that it was quite windy for at least a couple rounds last year, correct? What have winds been like lately?

Keith Murray: Friday was very windy last year, that was about it. It hasn’t been very breezy lately but in the desert that can change in no time.

All Things Disc Golf: Paul McBeth has won this tournament two years in a row. Last year’s win kick started a lot of momentum for him which included a world championship. Do you think McBeth can make it three in a row?

Keith Murray: I wouldn’t be shocked, he has so many skills. With that being said there is just so much talent out there. Gotta love locals Paul Ulibarri as well as new transplant Dave Feldberg. Nikko Locastro is always in the mix and you just never know who else might be up there. For the ladies Val could easily repeat and Catrina Ulibarri, Paige Pierce and Sarah Hokom can all make a run at the title. This will be Ken Climo’s first year playing Master at the Memorial Championship and I wouldn’t bet against him.

All Things Disc Golf: Discraft is once again the presenting sponsor of the Memorial. What does their support mean for the folks running the tournament? Tell us about the special fundraiser discs they have released this year.

Keith Murray: This event would not be possible without the help from the World Leader in Disc Sports…Discraft! From running exclusives for fund raising like the ESP Nuke SS and ESP Buzzz SS to all the cool stuff that they put into the players packages. Their continued support has helped us make this tournament what it is today.

All Things Disc Golf: Who else makes it possible for the Memorial to take place?

Keith Murray: We have some many great sponsors and volunteers it’s hard to know where to start. Personally I probably would be hiding in a closet right now if it wasn’t for Ashley Akens and Kimberly Warren. They have really helped me keep focus, taken on more duties and will be key to my sanity during the event. You don’t realize how tough it is for folks to take off work for this kind of event since it runs Wednesday – Saturday.

I have to give big thanks to all of our Championship Sponsors including Huklab who has sponsored this event for the past 10 years! Other companies that have stepped up are New Belgium Brewing Co., Duke’s Bar and Grill, LS Discs and Pocket Disc and way too many others to mention.

All Things Disc Golf: Beyond the great disc golf tournament, what else takes place during the week of the Memorial? Did we see a ball golf tournament on the Sunday after the tournament? Many disc golfers come out to this?

Keith Murray: We do host the Memorial Hangover Ball Golf Tourney the Sunday after the event. We get a number of top pros like Ken Climo, Philo Brathwait and more. It’s a fun best shot doubles event that is a great way to wind down from a hectic week.

All Things Disc Golf: We can’t forget the amateur side of the Memorial. What does the Am’s player’s pack look like?

Keith Murray: It looks as amazing as ever! Let’s just start with the awesomeness that Discraft has got for us like First Run Zombee’s, Memorial Championship Ti Nuke SS’s, Amateur National Championship Ti Avenger SS’s and a sweet bar stamped Challenger. That will all go into a very nice rolling cooler and so will a Pocket Disc, LS Discs metal waterbottle, Huklab $10 coupon, beach towel, player tag and more. I can go on and on but the value is right around $220!

All Things Disc Golf: What do the amateurs say about being able to play on the same stage as the pros at this tournament?

Keith Murray: They love coming out here and watching the top players in the world compete. That’s the main reason for stopping them on Fridays, so they can get out there on Saturday and watch the finals.

All Things Disc Golf: Disc Golf Planet TV will be at the Memorial again, correct?

Keith Murray: Yes, there will be live coverage for the Memorial Championship once again this year. We are very lucky to have them bring our event to the masses.

Thanks to Murray and the folks at Spinners on the Green for helping us with our preview of the 2013 Memorial Championship. Will McBeth make it three in a row? Will someone from Team Prodigy Disc take the crown? A new name? Only time will tell. We’ll have a full recap after a champion is crowned.

If you are going to the Memorial, be sure to send us pictures or video. We’d love to showcase your work. Just give us a shout.

Good luck to everyone at the 2013 Memorial Championship.