You are at:Home»Tournaments»Will Schusterick, Sarah Cunningham among winners at Beaver State Fling 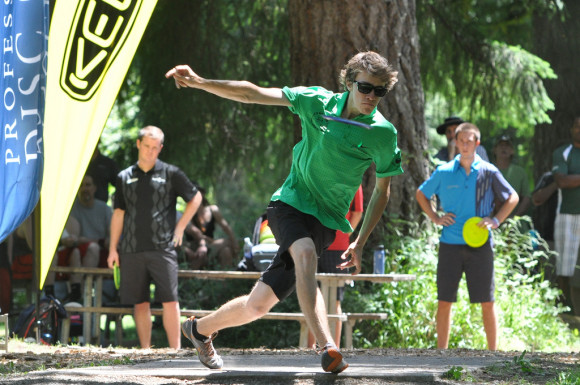 After picking up a victory to open the PDGA National Tour, Will Schusterick hasn’t been able to claim victory on the National Tour a second time until this weekend. With a very talented field in action, Schusterick held off many golfers to win the 2013 Beaver State Fling. Sarah Cunningham and Ken Climo were also among the winners.

After the first day of play on Friday, it was clear the tournament would come down to just a few throws. This was not going to be a tournament where someone would run away with it. After two rounds, Dave Feldberg held a one shot lead over Schusterick as the tournament headed to the weekend.

Saturday’s Round 3 saw Schusterick start to pull away a little bit. Schusterick shot a 51 to take a two shot lead over Feldberg who shot a 54. That was only half the story though. Schusterick and Feldberg had company at the top of the leaderboard. Garrett Gurthie shot an amazing 48 to take the hot round of the tournament. His 48 is unofficially rated at 1087. Nate Doss also had a hot hand shooting a 49. Ricky Wysocki was also in the mix just six shots behind entering the final round.

Sunday’s final round had just about everything you would want from a final 18 holes. Schusterick was looking to hang on for the victory, a slew of golfers were chasing, and others on lower cards were looking to steal the spotlight. Adam Hunt entered the final round ten shots behind the leader with 18 holes to play. Hunt was feeling it all day long shooting a 50 to finish five back of first. Hunt’s round included 12 birdies and one bogey. Hunt was able to birdie seven straight holes starting with hole six.

Hunt’s round was the best of the day, but it was the top of the leaderboard nearly matching each other shot for shot all round long. The golfer who appeared to have the best shot at catching Schusterick was Doss. Doss was in the mix the entire round, but a bogey on holes 7 and 14 would hurt his chances. Whlie Doss cashed in above par, Schusterick was able to pick up a birdie on both those holes.

While it certainly wasn’t easy, Schusterick’s final round 55 was enough to hang onto a two shot lead over Doss. Following Doss’ second place finish were Ricky Wysocki and Feldberg in a tie for third with Hunt rounding out the top five.

There was no one as consistent as Sarah Cunningham at the Beaver State Fling. Cunningham held a share of the lead after the first round and played very steady golf to take home the victory. With rounds of 62, 61, 62, and 60, Cunningham finished one over par for her second win on the PDGA National Tour (Masters Cup).

Paige Pierce was nearly as consistent as Cunningham, but was just a few shots behind Cunningham all weekend. Pierce finished at five over par for second place. Valarie Jenkins and Des Reading finished in a tie for third.

The PDGA National Tour takes a breather until the Vibram Open later this year.